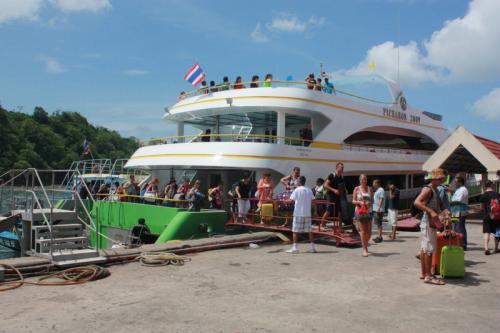 PHUKET: The rough seas brought on by the onset of the annual southwest monsoon have taken their toll on the Phuket tourist day-trip trade, with companies reporting only half the usual number of passengers.

Meanwhile, fishing boats have been unable to put to sea, with the resulting fall in supply causing an upsurge in seafood prices.

“Usually a fleet of about 50 fishing boats goes out each day, but right now that number has dropped to about 10. The large fishing trawlers can put to sea, but the smaller seine boats cannot,” he explained.

Having most of Phuket’s local fishing fleet remaining in port has directly hit seafood prices, with some prices rocketing to double what they were before the southwest monsoon arrived.

“Overall, seafood prices have increased by about 30 per cent,” Mr Korakot added.

Meanwhile, tour boats at Rassada Port are currently seeing about half the number of tourists taking boat tours compared with the number of bookings during the high season.

“From 1,000 tourists per day, we now have only 500,” Santi Phonyeumsann, a port staffer of the tour operator Chaokoh Group, explained.

“Our company will continue to provide tours with safety as our main concern. Our boats carry sufficient numbers of life jackets and our crews will operate boats with extra caution,” Mr Santi confirmed.

“I strongly suggest that all ship captains, crews and passengers closely follow weather reports and only go offshore when the wind and waves do not pose a danger.

“For your safety, do not leave shore when there are high waves and strong winds,” he said.