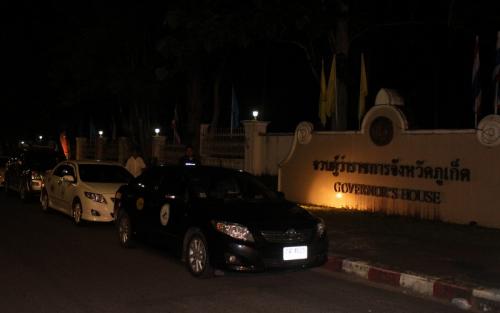 PHUKET: A sortie of about 30 illegal taxi drivers from the Mook Andaman co-operative staged an all-night vigil in front of the Governor’s Residence last night, finally causing the governor to agree to meet with them today to seek a resolution to their demand to serve passengers at Phuket International Airport.

Police were called in to ensure the drivers kept a safe distance from the official residence of Governor Maitri Inthusut. The governor’s family was not in the house during the silent siege.

The protest was held to highlight that the illegal drivers had been refused, yet again, by Phuket Mai Khao Company to serve passengers at the airport, said Mook Andaman President Songtham Mekmanee.

The grounds of Phuket Mai Khai Company’s consistent refusal are that the vehicles the illegal Mook Andaman drivers are using do not meet the standards required by law.

“Phuket Mai Khao Company still does not allow our drivers to join their service at the airport although they have been handed a formal request from us – at the Governor’s suggestion – that they allow five of our drivers to do so,” said Mr Songtham.

Governor Maitri has several times already been called on to resolve the conflict (story here), which stems from the Mook Andaman drivers being officially allowed to have some of their vehicles serve the airport under Phuket Mai Khao Company, which holds a formal contract with Airports of Thailand to operate a limousine service at the airport.

“We are in trouble. We cannot pick up passengers at the airport. We have done everything the government officers have told us, but still we have the same problem,” he added.