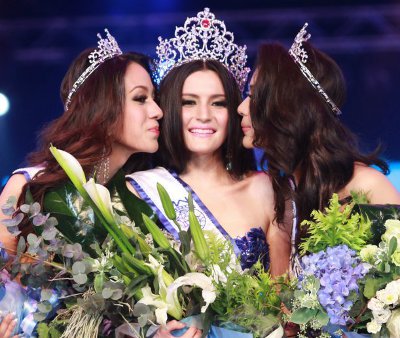 Miss Muangkod, a former student at Satree Phuket School, was also bestowed the titles Miss Beauty With a Purpose, Miss Top Model and Best in Swimsuit at the gala event, organized by Thai TV Channel 3 and BEC Tero Entertainment and held at the Bangkok Convention Center at Centara Grand, Central World.

Wining the three titles allowed Miss Muangkod to be “fast-tracked” into the final round of the competition, joining nine other finalists, chosen through elimination from an initial bevy of 30 beauties.

As winner of the prestigious crown, she was awarded prizes valued at more than six million baht.

Avid readers of the Phuket Gazette might remember Miss Muangkod from earlier reports.

Named Vanessa “Na-Chatra” Poung Herrmann Muangkod, the 20-year-old Thai-German model was born and raised in Phuket and also goes by the nickname “Van”.

She graduated from Satree Phuket School in Phuket with a bachelor of arts in humanities at Ramkhamhaeng University.

She will now represent Thailand at the Miss World 2012 finals at Ordos, Inner Mongolia, in China, on August 18.