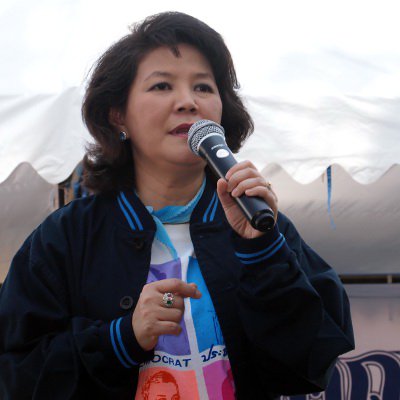 Among her “concerns” were the current redrafting of the Constitution, the multi-million-baht compensation to be paid to the families of red-shirt protesters killed in the May 2010 uprising, right down to rising prices of household goods.

Mrs Anchalee even warned that she “foresees trouble by the middle of this year” if these issues were not addressed.”

“What is frustrating people lately is the Constitution amendment issue. I hear that it has been continually worked on and will be sent back to Cabinet for their approval at the end of April or around the beginning of May,” Mrs Anchalee told a small gathering of Democrat supporters yesterday at the opening of the new Democrat Party office in Srisoonthorn, Thalang, in the north of Phuket.

“This amendment to the Constitution is contrary to the feelings of the people,” she said.

On the contentious red-shirt compensation being rolled out by the Pheu Thai government, Mrs Anchalee stressed the role of the Truth for Reconciliation Commission of Thailand (TRCT).

“Research by the King Prajadhipok’s Institute identifies that reconciliation requires the people of the nation to agree and accept the same thing.

“If, however, the Commission [TRCT] decides on their resolution and abandons the wishes of the rest, I believe there will be an explosion, especially when this issue comes at the same time as the amendments to the Constitution,” she warned.

“This includes the 7.5-million-baht compensation package to each of the families of the red-shirt protesters killed. I am concerned that all this will cause problems in the middle of this year,” she said.

“Add to that the expansion of the ‘Red Shirt Village’ [project] throughout Southern Thailand. This is not reconciliation. It is to divide people and create disharmony,” Mrs Anchalee said.

“Opposition Party leader Abhisit Vejjajiva presented this problem to PM Yingluck. He said that she is a government leader and as such she should be aware of these problems. Just talking about reconciliation does not work. Not when her followers keep working on disharmony,” she added.

Broadening her focus from political to household issues, Mrs Anchalee raised the issue of rising prices of household goods.

“The Phuket economy is facing the same situation as other provinces in Thailand. The high cost of living is hurting the whole nation. With low season now here, Phuket residents just have to try to survive and get through this period,” she said

“The nationwide high prices issue must be resolved before fixing the Constitution or changing the whole political process for just one person,” she added.

“The office is to be a coordination center for the people of Koh Kaew, Rassada, Patong, Kathu and Thalang – making it easier for people to contact their Phuket MP as well as being a focal point for disseminating [Democrat] Party information,” MP Areerob said.

The new Democratic Party branch office is the 183rd Democrat Party office to open in the country.

It is located at 127/17 Thepkrasattri Road, Srisoonthorn, Thalang.