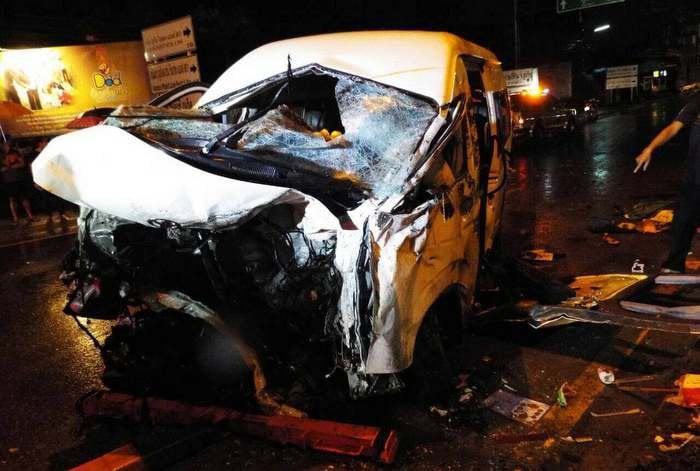 PHUKET: An out of control mini-van crashed head-on with a car in Phuket early this morning, killing one person, leaving a Chinese tourist in a coma and injuring five others.

“Witnesses explained that the van was heading north on Thepkrasattri Road, near Soi Wat Phra Thong, when the driver lost control of the vehicle on the wet road, crossed the median and smashed into a Thai family’s car that was traveling south,” explained Lt Col Sanit Nukong of the Thalang Police.

Despite rescue workers’ best efforts, the driver of the car, 26-year-old Ratchasak Chaithep, was pronounced dead on arrival at Thalang Hospital. The passengers in his car, including his wife, 6-year-old son and mother, suffered minor injuries. They were also taken to Thalang Hospital.

One of the two Chinese tourists riding in the yellow-plate van was thrown from the vehicle when it crashed. Shengnan Gu, 29, is now in a coma. The other tourist, Zhongren Jiang, 29, suffered a broken leg. The 31-year-old van driver, Sompan Meemueangnork, broke his arm. All were taken to Thalang Hospital.

“At this stage, we have yet to charge anyone. We will question people once they have recovered. However, based on eyewitness reports, I expect Mr Sompan will be charged with reckless driving causing death and injury.”