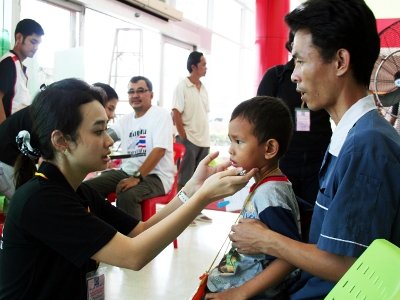 PHUKET: Emergency medical staff from Phuket have joined the flood-relief efforts in the devastated province of Ayutthaya, north of Bangkok.

They arrived as floodwaters were still rising, forcing them to relocate from their original location to higher ground at Phachee Hospital, Phachee District.

The first team comprised workers from Vachira Phuket Hospital, Thalang Hospital, Patong Hospital and private hospitals on the island, as well as specialist staff from a number of other agencies.

“The second DMAT team was led by Patong Hospital Director Dr Bhumin Silaphan. He and 30 officers worked from a mobile clinic set up at the Big C Supercenter in Ayutthaya from October 14 to 21,” said Dr Wiwat.

“They have been relieved by a team led by Dr Sompong Wannoon from Vachira Phuket Hospital that includes medical staff from Trang province,” he added.

The teams operate much like a regular hospital, offering in-patient and out-patient departments as well as an emergency ward.

The teams typically treat 300 to 400 patients daily. Most are local people and many are from Nakhon Luang District, which is almost completely under water, Dr Wiwat explained.

Each DMAT is subdivided into four teams, three of which operate in the field while the fourth remains on stand-by at the hospital.

The fourth DMAT, which has yet to be deployed, will comprise more mental health specialists to help victims deal with the psychological toll of the damage and loss of lives.

“We will continue sending DMATs there until the flooding situation improves,” Dr Wiwat said.

Joker in the pack for French rugby