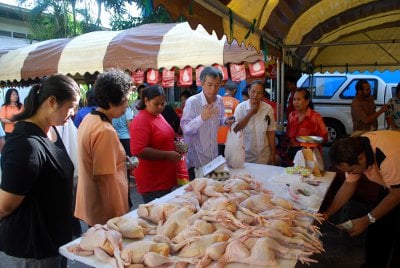 PHUKET: Phuket Town residents took just hours to snap up all the produce on sale at a special market yesterday aimed at providing relief from price rises brought on by the floods in Bangkok and Central Thailand.

The market, set up in front of the Phuket Chamber of Commerce offices in Phuket Town, sold out of 200 kilograms of chicken, 7,500 eggs, 150 kilos of pork as well as grilled chicken from Five Stars Chicken and frozen food and other products from Charoen Pokpahnd [CP] Group, one of Thailand’s largest distributor of consumables.

All the produce – sold at lower-than-market prices – was provided by local distributors operating in Southern Thailand, which has not been directly affected by the floods, explained PCC Secretary Surachai Chaiwat.

Many shoppers at the market complained to the Phuket Gazette that much of the produce on sale yesterday was difficult to find locally as the floods had caused shortages.

“The shortage of consumer goods and the rising prices are the result of the flood crisis in Central Thailand. We would like to help people get through the crisis by holding these discount products fair on the first Thursday and Friday of every month until the situation returns to normal,” said Mr Surachai.

“Many people came to the market today, and eggs were the highest in demand. We will try to bring more stock next month to make sure people have enough,” he said.