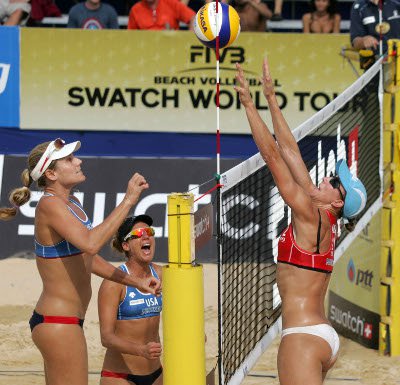 Saturday’s matches will include the remaining four matches from the contender’s bracket to determine the final two teams who will meet the teams from China and the USA in Saturday afternoon’s semi-finals.

Xue/Zhang, gold medalists in the inaugural 2006 Phuket event won both their matches in two-sets over Australia’s eighth-seeded Natalie Cook/Tamsin Hinchley, 21-19, 21-14 in 44 minutes and then sealed their semi-final berth with victory over Belgium’s 12th-seeded Katrien Gielen/Liesbeth Mouha, 22-20, 21-16 in just over 40 minutes.

USA’s Kessy/Ross, the champions in Phuket in both 2008 and 2009, struggled for their victories taking three sets to dispose of the Czech Republic’s seventh-seeded Kristyna Kolocova/Marketa Slukova, 11-21, 21-11 and 15-9 in 52 minutes. Again it took three sets to ensure their semi-final place with a win over Australia’s surprising 19th-seeded Louise Bawden/Becchara Palmer , 21-19, 18-21 and 15-11 in 76 minutes – the longest match of the tournament so far.

In the tiebreaker set of the match with the Australians, Kessy/Ross were down 4-7 and scored five consecutive points to take a 9-7 lead, from which the Aussies could not recover.

Saturday sees 5th and 7th places decided in addition to the semi-finalists.

The Phuket Thailand Open is being produced by Pentangle Promotions Co., Ltd. of Bangkok in association with the FIVB and the Thailand Volleyball Association.

The Phuket Gazette and PGTV is a charter sponsor of the FIVB Volleyball Swatch World Tour Phuket Thailand Open powered by PTT.