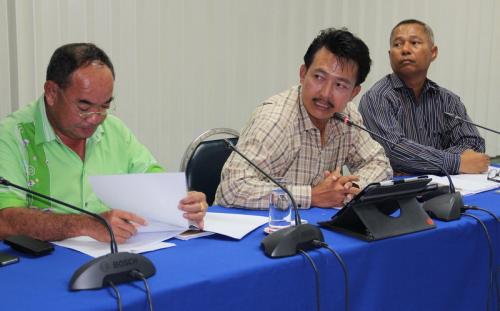 PHUKET: To offer tourists another option in getting from Phuket Airport to Patong Beach, the chief of the Phuket Marine Office yesterday proposed launching a “sea taxi” to ferry passengers down the island’s west coast.

The project is called “From the boat to the plane”, Chief Phuriphat Teerakulpisut told a meeting at the Phuket Treasury Office yesterday.

“Many tourists visit Phuket each year and last year we had around 9.5 million tourists coming to Phuket. Currently, the only way to travel from Phuket Airport to other tourist attractions on the island is by car. Since the population is growing and more and more people are buying cars, the traffic is getting worse,” he said.

“We want to help alleviate the traffic problem and offer tourists a better way of traveling by opening a boat route from the airport to Patong Beach,” Mr Phuriphat said.

Considering the current state of Phuket’s traffic congestion, Mr Phuriphat even ventured that passengers taking a boat from the airport would reach Patong faster than they would if they travelled by car.

“Tourists will arrive at Patong Beach faster by boat because the distance is shorter,” he observed.

“Traveling by car usually takes about an hour. In rush hour, it takes 90 minutes. But traveling by speedboat would take only 25 minutes, and by tour boat would be only 40 minutes,” he suggested.

“I think this project is a good idea. Phuket is growing and more transport options are needed. It will be more convenient, and more impressive, for tourists arriving on the island. They could save time while enjoying their trip,” Mr Phuripat concluded.

“We could even add more routes from the airport to other places around the island,” he added.

Mr Phuriphat’s sea taxi proposal was well received at the meeting, though the other attendees agreed that more research was needed before committing to the project.

Phuket Vice Governor Sommai Prijasilpa’s support also came with a few riders. “I agree with the idea, but the relevant officers have to learn more about the laws involved, such as local planning laws, if they are going to continue the project,” she said.

Vice Governor Sommai also pointed out that the area where the pier will need to be built at the airport belongs to the Phuket branch of the national air traffic control authority Aerothai (Aeronautical Radio of Thailand).

“So the construction of the pier might affect the safety of planes landing and taking off at the airport,” she said.

“We also have to consider the current expansion of Phuket Airport. We have to discuss with Phuket Aerothai and Phuket Airport management [Airports of Thailand] to see if it is possible to move ahead with this project,” V/Gov Sommai said.

New 20-baht banknote to launch in Phuket on April 1