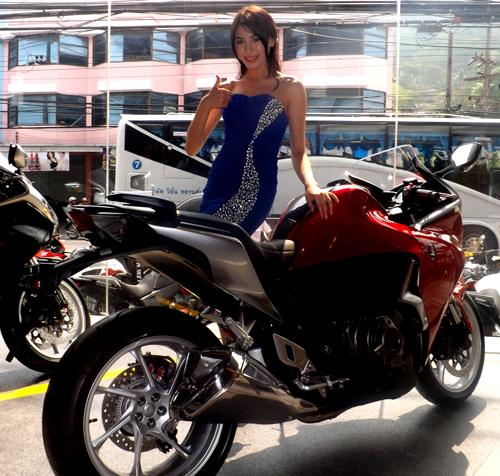 PHUKET: Honda’s BigWing dealership announced its arrival in Phuket yesterday with drum rolls and engines roaring, as the island’s biking community were eager to get their hands on the latest offerings from the Japanese giant.

Following their successes in Chiang Mai, Pattaya, Udon Thani and Bangkok, the island was the natural choice for the brand’s expansion into Southern Thailand.

Honda has chosen to launch the BigWing dealership in Phuket now, A.P. Honda President Chiaki Kato said, as the “big bike” market had shown exceptional growth across the Kingdom.

“When you take on any new venture, everything is about timing. We feel that this is the perfect moment to penetrate this regional market, and are confident in our ability and experience to effectively address the needs of the rider in this segment in Southern Thailand.”

The president emphasized that Honda’s leading market position is a result of its “5s” business model: Sales, service, spares, safety and society.

He went on explain that in addition to serving Thailand’s Southern market, Honda has its scopes set on the greater regional market, particularly the Singaporean and Malaysian markets.

Indeed, timing is everything. Phuket will host the 19th annual Big Bike week (click here for details) from April 14-21, which is themed and oriented toward the ASEAN community, with Honda BigWing a national sponsor of the event.

President Kato added that another driving force for the anticipated momentum of the Phuket market is AP Honda’s strong, 20-year relationship with Phuket S.T., its local representative.

Chaiwat “Chai” Pornsirianant of Phuket S.T., gave the Phuket Gazette his outlook for the year ahead.

“First, we are hopeful that Phuket residents will increasingly start turning to big bikes, [by using our] outstanding service facilities.

Then, we want to continue to build and enhance the motorcycle riding community here, especially one [that emphasizes] safety.”

Asked about the sales target for the first year, he said that the dealership expects to sell about 1,200 bikes.

If the numbers of bikes ridden away from today’s launch is any guide, almost topping 100 units, predominately with the eagerly anticipated CB500, in its three versions, it would be of little surprise if BigWing’s targets are surpassed, and rapidly.

The motorcycles will not only be going to Phuket, but throughout the region, as the new dealership will serve as a main distribution and service point for the entire Southern region, Mr Chaiwat added.

Honda BigWing Phuket’s range of motorcycles start at 205,000 baht for the CB500F, on up to the King of Grand Touring, the 1800cc Goldwing priced at 1.65 million baht (click here for details).