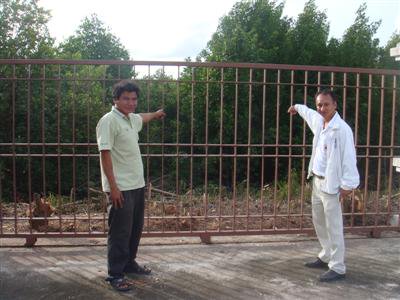 PHUKET CITY: Work on a long-awaited road connecting Saphan Hin and Sakdidet Road will begin next month, even though the Ministry of Natural Resources and Environment (MNRE) has yet to approve the project.

Phuket Governor Wichai Phraisa-ngop told a press conference at Phuket Provincial Hall on Monday that he has authorized work to begin.

Cabinet approval could come at a later date, he said.

The project has been held up for years by the MNRE because the road would run through protected mangrove forest that falls under the jurisdiction of the Royal Forest Department.

Work on the 30-million-baht project will begin soon after a religious ceremony that will take place at the project site, starting at 9am on Mothers’ Day, August 12.

The extension, scheduled to be completed before the year’s end, will be a ‘New Year’s gift’ for the people of Phuket, the governor said.

An unnamed project contractor has already been selected.

Work will be overseen by the Phuket Provincial Public Works Department.

The four-lane road, an extension of Sakdidet Road Soi 7, will make it much easier for residents of Wichit and Chalong to access Saphan Hin, Phuket City’s popular recreational area.

The 600-meter stretch needed to complete the road was originally presented to the MNRE in the form of a concrete flyover, which would have left the mangrove forest below largely unaffected.

Under the new cost-saving plan, however, eight rai of mangroves will be cleared to complete the road, which will be made of concrete using standard construction techniques.

Funding will be made available by diverting money from other provincial projects deemed less urgent, Governor Wichai said.

There was no truth behind a rumor that 2,000 rai of mangrove forest would be cleared for the project, he said.

Ongard Thanacharnmongkhon, who heads the MNRE’s Phuket Office, declined to elaborate on the project or the impending destruction of mangrove forest.

“I will do my duty and report to the MNRE, but I don’t know what the final outcome will be,” he said.

Among the beneficiaries of the project will be students and staff at the Chalermprakiat Somdejprasrinakarin Phuket School.

It was erected when the school was built over a decade ago, a time when the road extension was deemed imminent.

Twelve years later, students still need to go all the way around and enter through the back gate, located on a small soi off Rattanakosin 200 Pi Road, which runs along Klong Bangyai.

Chalermsak Chaiyanun, who teaches art at the school and is also responsible for buildings and maintenance, said the school had already been ordered to ‘take care’ of some parts of the mangrove forest in preparation for the August 12 ceremony.

He agrees with the road extension project, which will finally allow the main gate to serve as intended and greatly improve traffic flow in the area, he said.

The project is one of three for which the governor is awaiting Cabinet approval.

The other two are the new hill road from Patong to Chalong and a second north-south artery running parallel to Thepkrasattri Road in Thalang and tambon Koh Kaew, Muang District.