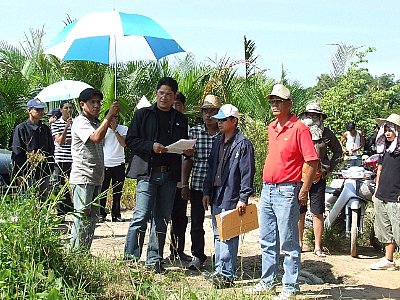 PHUKET: About 50 local residents yesterday morning protested over alleged encroachment onto eight rai of mangrove forest land in Rassada, on the east coast of Phuket.

Despite the fact that trees had already been cleared, the protesters were today trying to prevent Phuket Land Office surveyor Thanawut Jiarabutr from surveying the land, ownership of which is claimed under a Sor Kor 1 land deed presented by Mr Air Mardsri.

Initial talks at the protest site between local people and Mr Mardsri were arbitrated by Deputy Muang District Chief (Palad) Suwat Bubphaphoe. The discussion failed to resolve the matter, so it was decided to continue the proceedings at Muang District Office.

Discussions at the district office ended with both parties signing an agreement promising to cease activities until the case was investigated. The main point of contention was the authenticity of the deed held by Mr Mardsri.

Rassada Village 2 headman Sangkom Sintupradit told the Phuket Gazette that the forest had been cleared about nine months ago by Mr Mardsri and his partner Adisak Preekarn.

“They used the document Sor Kor 1 [as authority to carry out the work], which I’m not sure is right. So I would like the government officials to examine the document before doing anything [else].”

Mr Sangkom said that the forest was destroyed before he took up his position as headman about six months ago.

“I’m not sure if the previous headman was involved in this matter. The mangrove forest has been preserved for a long time and we were continually planting new trees. We are quite sure that the mangrove forest does not belong to anyone,” he said.