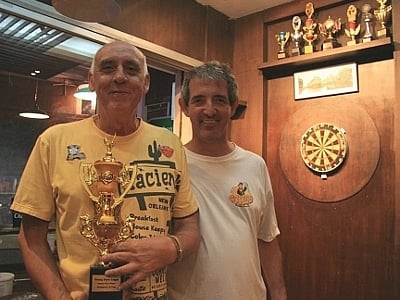 PHUKET: Hemingways A team has managed to put together quite possibly the best dart side the Phuket dart scene has ever had.

One-legged Tony C, the long time Patong league stalwart from the UK, is now supported by Rappe and Tony E, both former Swedish champions, and Big Ronnie. Even the talented Ulf (the Ulfman), or the “in form” Aey could not get a game this week as Hemingways A tried to close the gap on Hemingways B.

Tuesday night was set up to be a whitewash by Hemingways A, but Rod and Fred of Starfish had a different idea, pulling off one of the shocks of the season by beating Rappe and Tony E in the doubles. Rod almost won the first singles game against Tony E. All in all, this was almost an exhibition match. Final score: 12-1.

Pogues Mahon hosted Hemingways B team. “In form” Tong (Pogues) disposed of Kon-tiki Michael (Hemingways B) in two singles games, but apart from that, Thomas’s lads had a hard time staying with the league leaders and defending. Thomas and Baz (Pogues) did take Steve and Gerry (Hemingways B) to the wire in both of the doubles games but Hemingways B prevailed. Finally, Hemingways B won a beer leg… beer leg jinx over. Final score 3-10.

Lots of 140s reported in this weeks league games, but the sharpshooter of the week goes to Justin (Beach House) with a 160 against Shakers. Final score: 7-6.

Liam reports a great night in the Celtic bar as the two Irish bars Celtic and Market met for the first time this season. Terry (Celtic) took both singles games from the Joy (Market). Geoff eased past Liam to bring the scores to 4 games apiece after the singles. It was 6 games apiece after the doubles, leaving Market bar to snatch a victory in the beer leg. Final score: 6-7.

In other darting news, players who enjoy a game but don’t trust themselves to go to Patong can take part in a Sunday night competition at Wolfpack in Kata. Play starts at 8pm. All are invited, but only the first 16 players are accepted for the competition. Prizes, cold beer and good company is what you get. Please call Ulf (084-016 5890) for directions and further information.