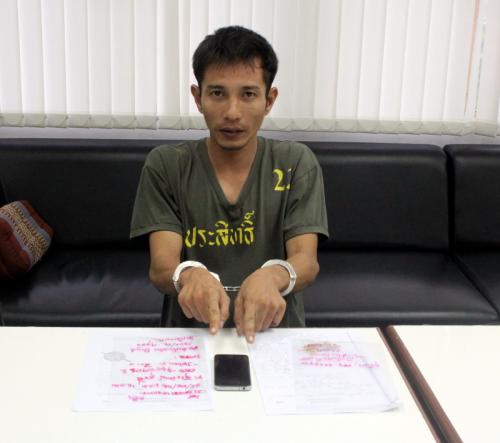 PHUKET: Phuket Police on Wednesday arrested a thief who confessed to stealing mobile phones from women in order to pay for prostitutes.

His most recent victim, Kanyakorn Nhoopong, reported to police on Wednesday that her mobile phone had been stolen from her clothing shop on Yaowarat Road.

“I put my iPhone on a table in my shop,” Ms Kanyakorn said.

“There was a man pretending to be a customer, and when I wasn’t watching, he took the phone and left,” she said.

Police went immediately to the motel and saw the suspect leaving on a motorbike.

“The suspect tried to escape, but the police were faster,” said Lt Col Prawit. “They arrested Nakorn Siriaksorn, 32, from Songkhla.”

Mr Nakorn had an iPhone 4 in his pocket and was charged with theft. During questioning, he told police that he had stolen seven other phones.

“He said he stole only from women and targeted beauty salons, clothing shops and offices with all-female staff,” said Col Prawit.

“He would pretend to be a customer and talk with the victim, then when she lowered her guard, he would steal her mobile phone.

“Then he would sell the phone and use the money to pay for prostitutes,” he said.