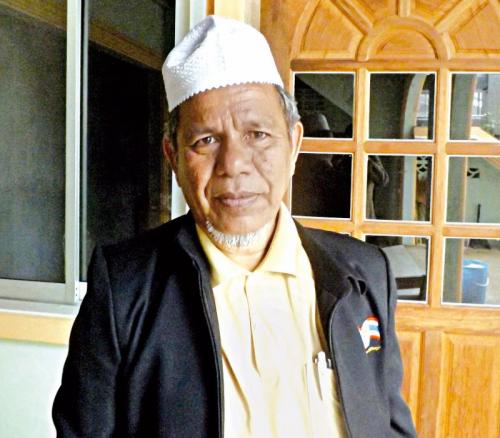 Maroj Thongyon, a 66-year-old Phuket native, has been a member of the committee of the Phuket Islamic Council since 1990 and is president of the Foundation Nurul Islamiah. Two years ago he took the position of Imam at the Nurulislam mosque in Patong. Here, he talks about the loss of cultural identity among Phuket Muslim youth and the opportunity to market Phuket as a halal-tourist destination.

PHUKET: Phuket is a very popular destination for tourists from around the world. Our island needs to promote its Muslim heritage by promoting halal food shops, marking sites important to Muslim history on the island and by noting mosques on guide books and maps.

Thai-Muslims compose about 30 per cent of Phuket’s population. Many Muslim communities on the island are historically located in Cherng Talay, Kamala, Rawai, Baan Ko En and more isolated areas across the island.

The members of these communities traditionally were fishermen or orchard gardeners, and unlike most of the Thai-Muslims in Yala, Narathiwat, and Pattani, Phuket’s population speaks Thai, not Malay.

There are many cultural Muslim traditions kept alive in Phuket, with celebrations being observed regularly.

The fact that we celebrate Eid al-Fitr and Eid al-Adha, as well as many other holidays, allows Muslims around the world to come to a tropical paradise and feel welcomed into communities that understand their needs and can cater to them.

For example, Eid al-Adha is the holiday observed at the end of the Hajj, the annual Muslim pilgrimage to Mecca, which is one of the most significant religious observances in Islam. For those who are unable to go to Mecca, there are morning prayers held here in Phuket.

In Phuket, we maintain halal. The term “halal” is used to designate any object or action that is permissible to use or engage in according to Islamic Law. The term does not cover just food and drink, but all matters of daily life.

These traditions and our culture need to be preserved and advertised because they can attract tourists but mainly because we need to re-inforce the values of our culture in the youth of today.

I think youths are not aware enough of the importance of the rules, rituals and practices that compose religion.

They lack the understanding, knowledge and education about religion and its importance. In many ways society is now pushing them away from religious understanding.

I am worried that one day they may look at religions and cultures and see nothing of value in them – it is a very serious problem.

It also must be presented to young people by members of their family, religious leaders and relevant organizations.

I hope in the future the new generation of Phuket Muslims will be more aware of their Islamic heritage and be stricter in their observations of halal customs.