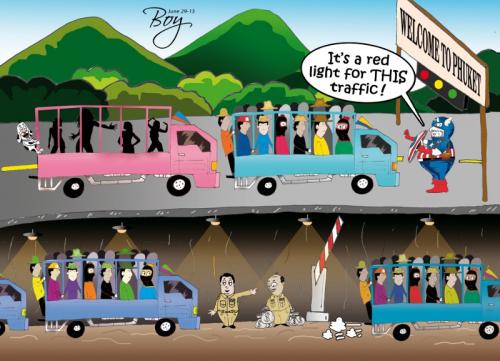 PHUKET: Few issues are more tragic and complex than human trafficking. Recent warnings by the US that Thailand faces relegation to Tier 3 status in the US Trafficking Persons Report for 2013 should serve as a wake-up call to all of the Thai government agencies that should be working together to bring human traffickers to justice, but are failing miserably.

Knee-jerk reactions in Bangkok to the US warning will likely betray xenophobia similar to that which went on exhibit here following International Monetary Fund (IMF) involvement in bailing out the Thai economy during the Asian financial meltdown of the late 1990s. There will be utterances of neo-colonialism, ‘you are not our boss’, and so on.

But this time, unlike 1997, we won’t need to read reports of thousands of Thai students telling a respected national survey that the IMF is an unidentified flying object, though there may arise some expressions of disgust over American police intentions to direct traffic during rush hours at Chalong Circle.

However, the US annual Trafficking in Persons Report does seem to hark back somewhat to a Cold War mentality; surely this is the type of research that should be conducted by the United Nations, not one of its member states.

That said, when the US issues warnings, Thailand tends to listen, especially when those warnings come with the real possibility of economic sanctions.

Whatever a person thinks of the messenger, the message itself really should be heeded because human trafficking is everywhere in Thailand, and in no part of the Kingdom is it more ‘in your face’ than right here in Phuket. Illegal migrants, mostly from Myanmar, do almost all of the heavy lifting here in jobs that many Thais won’t do: fishing, rubber tapping, domestic help and construction.

We owe them a lot; we give them little. We even have a whole generation of young Burmese who were born and have lived their entire lives in Phuket, but enjoy no rights whatsoever. Chances for a meaningful education are almost non-existent.

The issue of human trafficking casts into the spotlight all of the baffling inequalities among people that are part and parcel of the human condition.

Perhaps the only way to view it in a more positive light is to put it in historical context; to consider how far we have come in the past 100 years, at least where human rights are concerned. It’s hard to believe that slavery, which has been around since the dawn of man, has now been legally abolished in virtually every country of the world. Women’s rights and the legal end to many forms of discrimination have come in leaps and bounds. The US has a black president; Thailand has its first female premier.

We are heading in the right direction, and fast. Tackling human trafficking in all of its forms is the right place to continue this effort, and there is no better place or time to do so than here and now. Lives hang in the balance.

If we can improve the lives of the poorest and most disadvantaged among us, the world will surely be a better place for one and all. History proves it.

Phuket Opinion: Exceptions, all of us