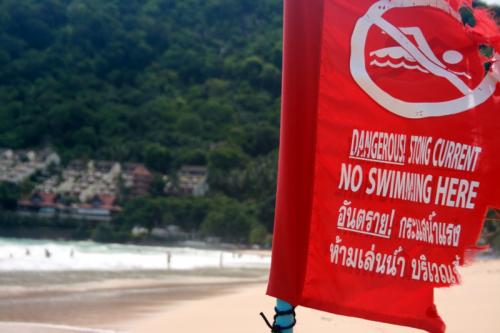 PHUKET: The lifeguards stationed at Phuket’s popular beaches have urged tourists to beware the dangerous surf and rip tides brought on by the return of the annual southwest monsoon.

“I urge all visitors to be especially cautious during this period. Most of the drowning victims in Phuket were caught in rip currents. They tried to swim back to shore, but became too tired and drowned,” Mr Prathaiyut told the Phuket Gazette.

“Now, with the [southwest] monsoon season here, the rip currents are stronger than usual,” he warned.

Mr Prathaiyut urged all beach-goers to observe and follow the surf warning flags.

“Please do not attempt to swim when red flags are posted. I also strongly advise everyone to check with lifeguards on duty before going for a swim. They can explain where and when you should or should not swim,” he added.

“From May 28, 2012 through April 27, 2013, the Phuket lifeguards rescued 882 people – that is, 156 Thais and 726 foreigners – from the surf,” said Kanyarat Senrung, an officer at the Phuket Provincial Administrative Organization (PPAO) Tourism Department.

Mr Prathaiyut explained that one of the biggest barriers lifeguards face in saving tourists’ lives were the attitudes of the tourists themselves. Many tourists choose to ignore lifeguards’ warnings and end up endangering their own lives, he said.

“We sometimes have problems with tourists not following our warnings, especially Russians. I don’t think communication is an issue in this case. Some Russians just don’t listen and think they can swim,” Mr Prathaiyut said.

“Some tourists get upset and cause a scene, to which I have urged all lifeguards to stay calm and politely explain to the tourists the dangers of swimming in such conditions.

“I would like everyone to realize that lifeguards warn you for your own safety. Please swim only in the designated swimming zones,” he added.