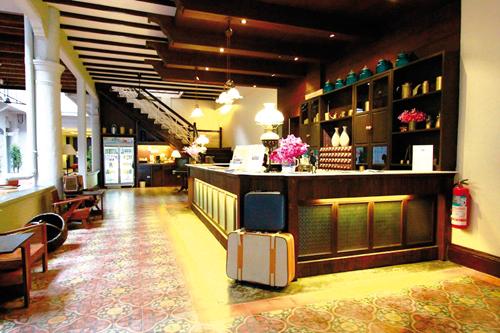 PHUKET: The On On Hotel on Phang Nga Road in Phuket Town is now a place you could recommend to your mother. Gone are the cars parked in the atrium, the scary hallways, the worn-out bedrooms whose appearance in the film ‘The Beach’ made it the world’s most famous dive and a magnet for backpackers. The renovation of the hotel, which has transformed it into an upscale city oasis, honors every part of its past, including the backpackers.

The founder of the On On, the grandfather of the current owner, Anurak Tansiriroj, never set out to be a hotelier. He was a trader in the days when Phuket was a thriving mining community. Realizing that visiting businessmen needed a place to put up for a night or two, “He had a vision,” said Kyaw Kyaw Khine, the hotel manager, and decided to build a hotel in Phuket Town.

An architect was commissioned from Penang to design the hotel in a Sino-Portuguese style and to oversee the construction. When it opened in 1929 it had five rooms that went for 80 satang a night.

Eight decades later, when the time came to renovate, the reins were handed over to The Treasury Village Group, a Bangkok company that operates two other properties in the area. They sent a management team back to Penang to draw inspiration from boutique hotels in historic buildings.

They found answers to a couple of problems that come with the Sino-Portuguese territory.

What do you do when you have a big hole in the center of your building which brings in light and breeze, but also rain?

You build a gorgeous red-tiled courtyard with a pond in the middle of it and spend a million baht creating an underground drainage field to keep it from flooding.

And what do you do for views when your building is narrow and deep, and hemmed in on each side by other buildings?

You look inward, and use your beautiful courtyard and open second floor walkways and lounges to create a magical space with multiple views: the sky peeking in here, glimpses of treetops over there, a cobalt blue wall and terra cotta roof tiles. You blur the notions of inside and outside.

From the street, the On On looks much the same, but inside the three large entrance doors, the old restaurant, driveway and tour center have given way to cool dark lounges, buffers from the bright outside world.

The owner wanted to preserve the building, the place of his ancestors’ history, said Waralee Thitivorn, creative director of the Treasury Village Group.

The design theme takes us back to the founder’s time, with floral tile floors, dark wood furniture, vintage luggage at the front desk and trader’s weights and the founder’s own abacus behind it.

The hotel’s two grand staircases are still intact. One leads to dorm rooms, the other to private accommodation.

The early traders probably wouldn’t feel out of place in one of the spacious, high-ceilinged private rooms upstairs, once they finished puzzling over the flat screen TV, refrigerator, rain shower and thick mattress.

The rooms effuse a sense of history, from the subdued gray paint and the wide-planked wood floors to the short-legged Chinese chairs and rotary phone by the bed.

“We tried to keep the Chinese design element in as many features as possible,” said Ms Thitivorn, pointing out the drawer knobs, amenities box and no-smoking sign.

Some private rooms, including Mr DiCaprio’s of ‘The Beach’, number 204, have French doors leading to small terraces. Though the view is of a wall, potted plants give a ‘gardeny’ feel and provide privacy from the next-door guest who shares the terrace. On our visit, we saw a bird in his nest amid the foliage.

The list price of the private rooms is 2,400 to 5,400 baht, with generous discounts available during the soft-opening period.

The dorm rooms, which are accessed via the front staircase, are both co-ed and female-only, and cost 400 and 500 baht during the soft opening period.

Former backpacker guests of the hotel have walked in, Mr Khine said, and complained that the rooms are too expensive.

Previously, a standard fan room without a bathroom cost 180 baht.

But Mr Khine invites them to see the dorm rooms, offers a discounted price, and they end up staying.

And it’s no wonder. The rooms are large and the bunk beds wide; each with its own electrical outlet, reading light, and curtain for privacy. There is also a communal kitchen area with cute dishware and a large TV room.

It is the bathrooms, though, that are the most extraordinary part of the dorm option; they are luxurious, with emerald hued ceramic sinks and private rain showers behind frosted glass doors.

Of the remodeling, Ms Thitivorn said, “We wanted to reuse some of the original materials, but most of them were too old. We had to reinforce all the supporting columns and lay new wood floors upstairs.”

But some original elements remain – the staircases, for one, and the tile floor in a second storey lounge. And some roof tiles were salvaged and relocated to where they can easily be seen.

The redecorating is not complete yet, nor is the restaurant next door. All should be in order in time for the grand opening in October, set to coincide with the vegetarian festival.

It’s not just the building that has changed, but the name as well – it’s now The Memory at On On Hotel. Like all the best memories, it has held on to the good while forgetting the bad.