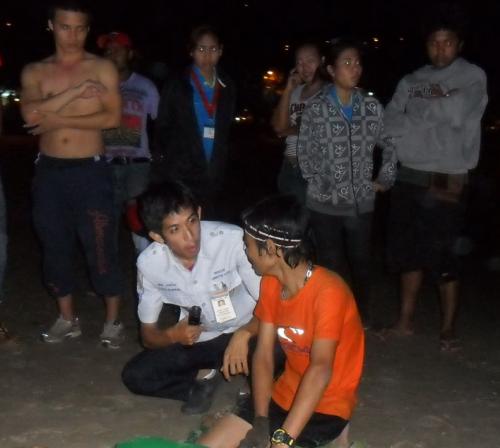 PHUKET: The heavy waves striking Phuket’s west coast over the weekend claimed the life of one man fishing at Patong last night and demanded the Marine Police assist a fishing boat in distress.

Police responded to an emergency call at about 7pm yesterday, reporting that one man had drowned while fishing at Patong.

The officers arrived at the scene, the southern headland of Patong Bay, with Kusoldharm Foundation rescue workers to find 27-year-old Burmese man “Mr Mhao” crying and cradling his father’s body.

Mr Mhao explained to police that his father, Mr Zo, 57, was hit by a big wave when he was just about to cast his fishing net.

“He walked off to a separate area so he could cast his net, but he was hit by a big wave, which ended up wrapping the net around him.

“He fell down into the water and the net stopped him from being able to keep his head above the waves. It happened so quickly,” he said.

The fatal incident at Patong followed Marine Police rescuing a fishing boat in distress about 10 nautical miles offshore from the Sarasin Bridge at the northern tip of Phuket.

The Sor Kleddaow with her captain and crew of eight were adrift for over seven hours, while their boat was taking on water through a cracked hull.

Phuket Marine Police Inspector Chatchai Sakdee and his crew on board the Khun Pum (Tor 814) received the distress call just after midday.

Sad Polploy, the 56-year-old captain of the Sor Kleddaow, explained that his crew were returning from the Similan Islands late Saturday night when they noticed they were in trouble.

“The boat started taking on water at about 11pm. We didn’t hit anything, so I didn’t even know the boat had a cracked hull,” he said.

“The engine died and we tried to get the water out of the boat. We tried to fix the engine, but couldn’t, so called the Marine Police,” Capt Sad added.

“Waves reaching up to three meters high and strong winds are expected to continue until at least Friday. Small vessels should not leave shore while the rough weather continues,” Col Chatchai warned.