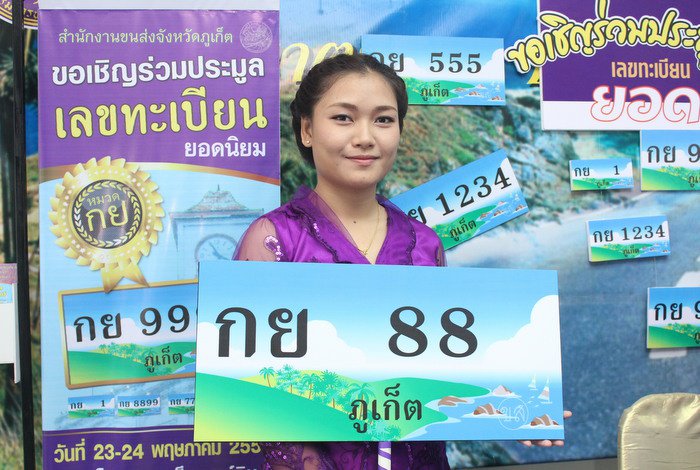 PHUKET: The Phuket Land Transport Office (PLTO) is hoping to raise more than 20 million baht from this year’s Lucky Licence Plate Auction, which will be held in Phuket Town next weekend.

The two-day event at the Phuket Merlin Hotel will begin on May 23 at 9am, with 301 licence plates to go to the highest bidders.

All licence plates to be auctioned – which must be fitted to private sedans with a capacity of fewer than seven persons – are designated with the Thai letters Gor Yor and have a background image in color of Phuket’s Promthep Cape.

“The most highly sought-after plates are those with the same digit four times in succession,” PLTO Chief Teerayut Prasertpol said.

Last year, the PLTO raised more than 23mn baht. The highest bid was for plate Gor Mor 9999, which was auctioned for 1.03mn baht (story here).

The proceeds will go to a road-safety fund operated by the head office of the Land Transport Department in Bangkok.

“The fund supports people permanently injured from road accidents, by providing them with things such as wheelchairs or prosthetic limbs, and helps fund road-safety awareness campaigns.

“Last year we were able to give about 400,000 baht for new wheelchairs and prostheses as well as host road-safety campaigns for Children’s Day and Songkran,” Mr Teerayut added.

Registration for the auction will be open at the PLTO’s office in Phuket Town until May 22.

Cheap tuk-tuk service to be launched in Phuket Town