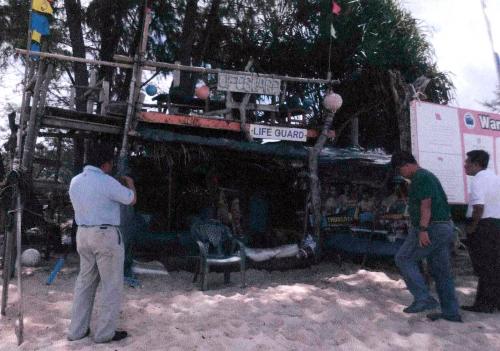 PHUKET: Karon Municipality has decided to remove the Phuket lifeguard stand on Karon Beach on the grounds that it is unsightly and not fit for use.

“We have contacted Phuket Provincial Administration Organization [PPAO] about the messy facility and have requested they remove it,” Palad Weereasak told the Phuket Gazette today.

“I have ordered staff to pen a letter to order the station be removed from the beach. It will be sent to the lifeguards tomorrow.

“However, we will give them 30 days to remove the station as the PPAO need time to design and fund an improved facility,” he said.

“The lifeguard station is the PPAO’s responsibility. Our duty is to make the beach nice and clean for tourists,” he added.

PPAO Tourism Department officer Nararit Touyon told the Gazette today she had been notified of the municipality’s intention to have the lifeguard station pulled down.

“We will talk about this and find a solution. We will release news of developments as soon as we’ve figured out how best to proceed,” she said.

“My staff built this simple place with materials they found in the area because they need shade for themselves and for their life saving equipment,” he told the Gazette.

“Karon’s Deputy Mayor came to see the station, but we have yet to receive any order to remove it. It is here because this is one of the most dangerous stretches of beach in Phuket,” he said.