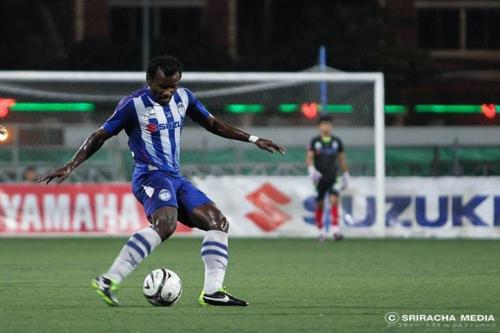 PHUKET: Every season since getting promoted to the Yamaha League One (YL1), Phuket FC has had a devastating off-day; in the 2011 season, it was their 7-0 away-loss to Buriram; last year, it happened twice on the road – in their 6-0 loss to PTT Rayong and 5-1 loss to Saraburi.

Last Saturday the Islanders experienced another such day – losing on the road to a lower-ranked Si Racha FC, 5-1.

Indeed, it was the biggest blow-out Phuket had suffered all season, so far.

Opening the goal fest for Si Racha in the 23rd minute was Belgian national Nlome Berlin, who also scored his side’s fifth and final goal in the 85th minute to bag his 13th and 14th of the season.

Also scoring two goals for the Blue Marlins, Montenegrin Ivan Boskovic netted the ball in the 29th and 72nd minutes for his 3rd and 4th of the season.

The Blue Marlins’ other goal came from Pradipat Armatanpri on 80 minutes.

It looked to be a shut-out, but Phuket’s Ludovick Takam scored a consolation goal in the final moments of injury time.

It should also be noted that Phuket were left to play much of the second half with a man disadvantage, after their key Brazilian striker Luiz “Dudu” Purcino was sent off for picking up his second yellow card less than 10 minutes into the second half.

The ejection ended up costing Phuket three more goals and thus any momentum for a comeback.

Phuket fell into 8th place as a result, while Si Racha climbed up into 12th.

Following are all YL1 results from the weekend

Phuket FC’s next match is away against 17th placed Rayong FC, next Saturday, September 14. The Islanders will then return home for a match against Trat FC on September 21.