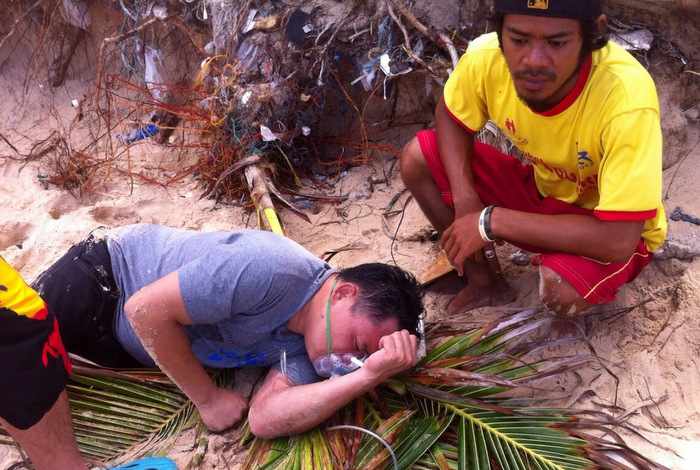 PHUKET: Lifeguards at Phuket’s Nai Harn Beach have called for swimmers to not wear jeans in the surf after a tourist wearing them nearly drowned there late yesterday afternoon.

Lifeguards pulled Kammapol Suyapiew, 40, unconscious from the heavy surf after he went swimming with friends in an area marked by red flags.

“We tried to warn them when we saw them entering the surf, but they ignored us,” Nai Harn chief lifeguard Jula Nontree told the Phuket Gazette.

“The waves dragged him into deeper water. By the time lifeguards got him back to shore, he was unconscious.”

“He was taken to the Phuket Provincial Administrative Organization (PPAO) Hospital [near Phuket Town] as a precaution. He is now safe,” said Mr Jula.

The chief lifeguard called on all beachgoers to respect the warning flags posted along the beach.

“Please, swim only between the red-yellow flags. The areas marked by red flags are too dangerous to swim in,” he said.

“Jeans make you heavier and restrict your ability to swim,” he said. “It also makes it more difficult for lifeguards to rescue you if you end up in trouble.”

Thalang open their account with a win over Laguna