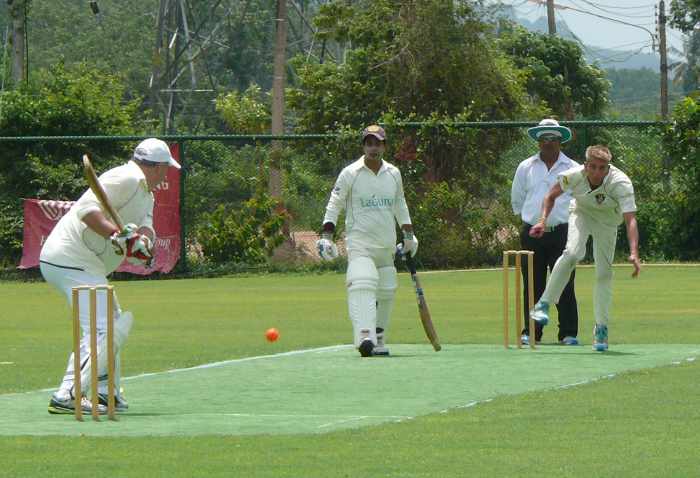 With both teams chasing their first points of the Outrigger Twenty20 season, last year’s premiers Laguna were pitted against Thalang, recent winners of the 35 over league.

The coin fell Thalang’s way and Captain Craig Murphy elected to bat. Manish Sadarangani did what Laguna couldn’t do in the recent grand final when he picked up Andrew McMillan’s wicket in the very first over.

It wasn’t a sign of things to come as Simon Wetherell set about the Laguna attack in his familiar fashion. Justin Thomatos had missed Thalang’s first T20 match but wasn’t out of touch and the pair posted 100/1 at the 10 over drinks break.

Just after the break Wetherell brought up his half century but the Phuket sun had clearly taken it’s toll. First Thomatos (35 runs) was caught off a no-ball and then later in the same over he was again caught, this time off a legal delivery.

Thai youngster Paan strode out and back without scoring and Wetherell (57 runs) ran himself out to have Thalang 115/4 after 13 overs. With batting to come Thalang may have expected a high total but it was Laguna that bowled themselves back into contention. Only 2 more boundaries were scored in the next 7 overs and Thalang’s innings closed on 152/6. Sameer Khan was the pick of the bowlers with 2/17 from 4 overs.

Requiring 7.6 runs per over Laguna were immediately under pressure with some tight bowling from Thai youngster ‘Paan’. Only poor fielding from Thalang kept Laguna’s opening pair out in the middle and ironically it was Paan that took a catch in the third over to remove Damien Clowes from the bowling of Barrie Buck. The highest run scorers from Laguna’s last match Manish and Rishi Sadarangani both fell cheaply to the bowling of the Thai youngster in the 4th and 6th overs as Paan led the way in a Thalang team comprising 4 Thai players.

Next on Paan’s radar was the difficult high catch of Ali Khan from the bowling of Buck and Laguna were an unlikely 36/4 from 6.5 overs. If anyone was going to hit the runs for Laguna it was Sameer Khan and Stuart Reading, that were now at the crease and in the 3.1 overs prior to drinks they hit 30 runs without loss. Five balls after the break and the hard hitting Sameer Khan (39 runs) was bowled by Andrew McMillan.

Iqbal Malik and Roly Cooper came and went to the bowling of Justin Thomatos and Reading played a lone hand in tricky run chase full of dropped catches from Thalang. Laguna got as close as 111/5 with 5 overs to play but fell 15 runs short as Thalang secured their first points of the season. Reading and Khan were the best of the Laguna batsmen. Buck 2/15 and Thomatos 3/29 were the pick of the bowlers for Thalang.

The next fixture is on Sunday 27th with ICC playing Thalang in the morning and The Village playing Laguna in the afternoon. Start times are 10am and 2pm respectively.