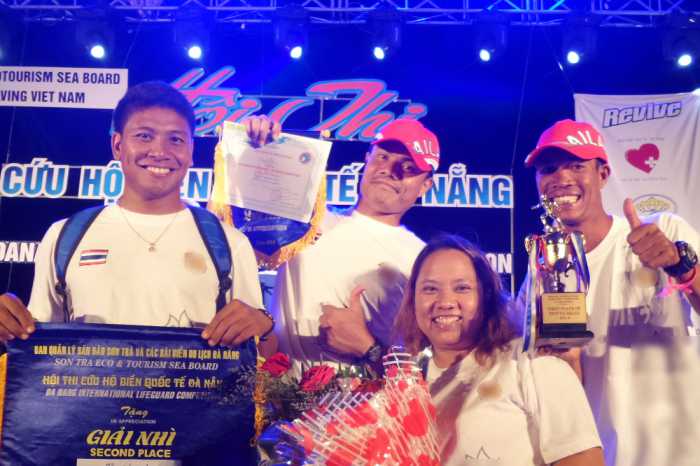 PHUKET: The island’s own Phuket Lifeguard Club brought home gold on behalf of Thailand from the Da Nang International Lifeguard Competition in Vietnam, held on September 7.

“We won the first-place trophy in the three-man rescue board relay. This activity is one of the most important parts of a lifeguard’s duties, and we won the top prize,” said Prathaiyut Chuayuan, 45, the president of the Phuket Lifeguard Club, who acted as team leader during the competition.

Mr Prathaiyut was part of a four-man team during the games, along with local lifeguards Somporn Wareekoon, a guard at Nai Thon; Rittidete Chonlatee, a lifeguard instructor; and Somchai Rodchana, a lifeguard from Kalima Hotel Patong.

“I want everyone to know that being a lifeguard isn’t just a job. In many countries, it is a sport as well. Good lifeguards have to be strong and fit, so they are able to save lives,” said Mr Prathaiyut.

The Phuket Lifeguard Team has an established reputation throughout Asia, as it participated in the 2012 World Lifesaving Championship in Australia in the name of Thailand.

“I have heard from the president of Surf Lifesaving Australia that they are pushing to have surf lifesaving events included in the Olympic Games,” said Mr Prathaiyut.

“The sport aspect of lifesaving is becoming popular in many countries. Vietnam took advantage of its quickly growing popularity and used it to promote tourism in Da Nang.

“Thailand has never held such an event, but I can see it happening in the near future.”

Open-water swimming, another major aspect of lifesaving, will be one of the competitions featured in the 2014 Asian Beach Games, which will be held in Phuket in November, Mr Prathaiyut noted.