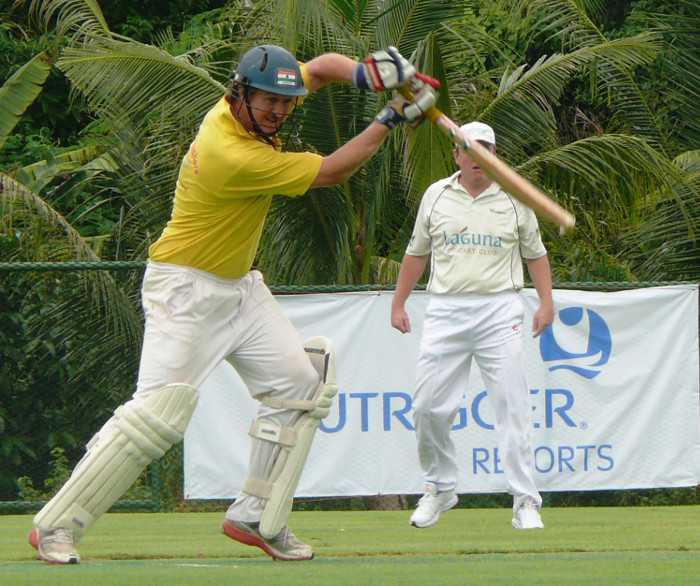 PHUKET: Confirming their domination of the Outrigger T20 cricket league, The Bondi Bar Bashers (Tri Bs) claimed a seventh victory in eight games with a win against Laguna on Sunday at the ACG.

Tri Bs must now wait for the result between Thalang and ICC from which their opponents for September 22 will be decided.

Seemant Raju (21) and Mike Khan were first to the rain-soaked crease, but Khan was caught by Manish Sadarangani off the bowling of Iqbal Malik having faced just three deliveries.

A sluggish outfield made for a lot of running, but Raju and Paddy Morton (19) were beginning to find their ranges when first Morton was bowled and then Raju was caught off the bowling of Nawez.

Dave Thomas, who top scored with 37 not out and Neil Quail worked hard for their partnership of 34 and brought the score to 93 before Quail was bowled by Ali Khan.

Anthony Van Blerk (16) joined Thomas to battle their way to a 41-run partnership and boost the score to 138, but Tri Bs could only add an extra three runs in their final over leaving Laguna 142 to secure a vital win.

Laguna got off to a solid start with Sadarangani (35) and Khan hiking the score to 60 before Khan’s wicket fell to Morton and Sadarangani’s to Swart.

Laguna’s run chase stalled, but resurgence came in the form of Malik, who smashed 32 to bring his side to within reach of a win.

The next fixture is on Sunday14th September with The Village playing Laguna to avoid the in the morning and Thalang playing ICC in the afternoon. Start times are 10am and 2pm respectively.