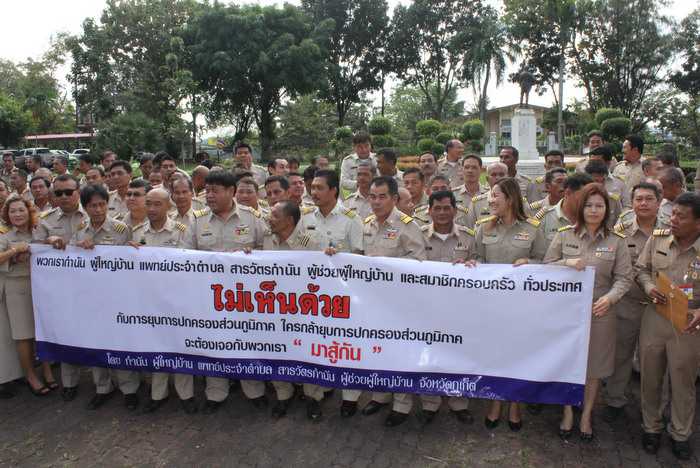 “We are here because of changes proposed by the Constitution Drafting Committee on November 25,” said Kittisak Sotraksa, protest leader and president of Phuket’s association of kamnan (subdistrict chiefs) and phu yai baan (village chiefs).

“One of the proposals is to have elections for provincial governors, as well as local leaders such as kamnan and phu yai baan. Additionally, it proposes a two-year limit to their terms.”

Currently, the Ministry of Interior is in charge of appointing provincial governors and there is no specific term limit for those chosen. Kamnan and phu yai baan are allowed to keep their positions until they are 60 years old.

“Local administrative officers must be well connected with local people. If kamnan and phu yai baan change every two years along with the governor, the leaders and locals will not be able to build the necessary rapport,” Mr Kittisak said.

“We think that more problems between leaders and local residents will occur in the future if this happens, so we are asking the prime minister to prevent these changes.”

The protesters presented their letter of complaint to Governor Nisit Jansomwong, who promised to pass it on to PM Prayut Chan-ocha.

“I respect everyone’s thoughts on this. I believe we all love our country and are willing to help move it forward together,” Governor Nisit said.