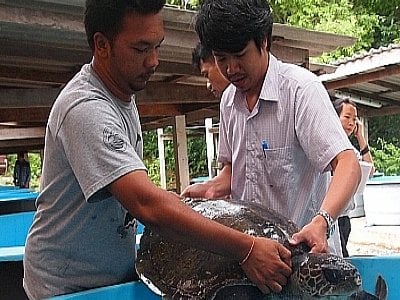 PHUKET: Islanders living on Koh Ra and Koh Pratong in Phang Nga have been selected by the Phuket Marine Biological Center (PMBC) to participate in a pilot scheme for a community network to preserve the sea turtle population.

Dr Kongkiat Kittiwattanawong, who heads the PMBC’s Endangered Species Unit, told the Phuket Gazette that the number of turtles laying eggs on beaches along the Andaman coast has decreased drastically.

Citing discarded fishing nets and other human activities among the main causes of turtles being washed ashore, Dr Kongkiat said that the PMBC needs help from local villagers to preserve sea turtle numbers.

“Preserving sea turtle populations is not the responsibility of just one country. Every country needs to work on it together, especially among Asean members as many of us share the same ocean,” said Dr Kongkiat.

“The PMBC will launch the project around Koh Ra and Koh Pratong. We want to instill awareness of the problem and build up a preservation network in the community.

“We chose Koh Ra and Koh Pratong because these islands have plenty of seagrass and the conditions are suitable for Olive Ridley, Hawksbill, Leatherback and Green turtles to lay eggs,” he added.

Referring to the damage to the turtles’ egg-laying sites, Dr Kongkiat pointed the finger at local departments who he said had failed to look after the beaches.

“Now only Green and Leatherback turtles lay eggs on these two beaches,” he added.

According to PMBC statistics, in 2009 officials counted 30 turtle nests on the beach. By 2010 that figure had dropped to only four or five nests and last year only two nests were identified.

“So far this year we have counted only three nests on Koh Ra and Koh Pratong. We need to get into the community and ask for everyone’s cooperation. I believe that if the villagers help us and do not encroach into the egg laying areas, the turtles will return and the number of eggs being laid will increase,” Dr Kongkiet said.

The preservation project comes in the wake of the PMBC recovering at least 24 injured turtles that washed ashore on beaches in Phuket and Phang Nga over the past three months.