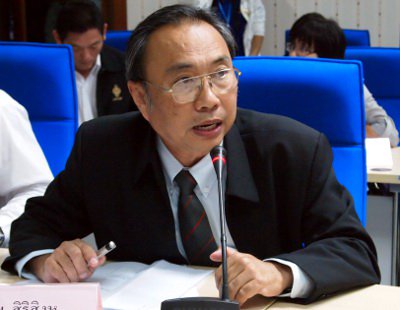 PHUKET: The Expressway Authority of Thailand (EXAT), the government agency tasked with conducting a feasibility study of the Patong Road Tunnel project, has said that the tunnel from Kathu to Patong could be completed by 2018 if the budget is procured by the 2013 financial year.

A study undertaken in November 2011 projected the amount required from the central government at 3.5 billion baht. The figure being considered in March of this year, during the mobile Cabinet meeting in Phuket was, 5.5bn baht.

In June this year, however, EXAT Governor Aiyanat Tinapai announced that new design features included by EXAT have raised that figure to 6bn baht.

Speaking at a meeting of the Senate Standing Committee on Transport at Phuket International Airport this week to discuss unrelated taxi issues, EXAT Deputy Governor for Technical Affairs Sintop Sirisingha gave the attending media a progress report on the tunnel project.

“One of the important issues we have had to face is the use of the tunnel by motorbikes and salang (motorbikes with sidecars), and parking facilities around the tunnel entrances,” he said.

In a meeting with Patong Mayor Pian Keesan in June, EXAT Governor Aiyanat Tinapai explained that motorbikes are normally not allowed on expressways operated by EXAT, but that Phuket was a special case, as it is a tourist destination, and this would make things more convenient for tourists.

Mr Sintop reiterated some of the design characteristics that would be included in the tunnel construction.

“We will set up the toll collection booths and construct the control center building to monitor the electricity supply and other utilities in the tunnel such as emergency telephones and a CCTV system,” said Mr Sintop.

“The beginning of the road that will go through the tunnel will be in Kathu district. It will start at a new intersection from route 4029 [road approaching Patong Hill]. The tunnel approach road will be raised on a 577m flyover consisting of four or six 6 lanes.”

“Once emerging from the tunnel on the Patong side, another four- to six-lane, 3km flyover will descend to connect at ground level with Phang Muang Sai Kor Road [at the rear of the Jungceylon shopping complex],” he said.