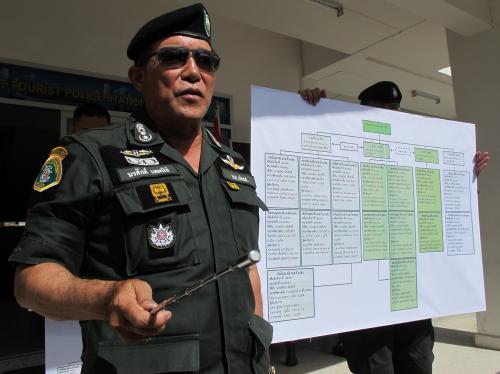 PHUKET: The Phuket jungle-trekking tourism industry came under scrutiny again on Wednesday when officers from the Natural Resources and Environmental Crime Suppression Division (NREC) raided seven elephant camps in Phuket to try to determine whether or not seven elephants had been trafficked onto the island.

The camps raided were: Sai Yuan Elephant Camp, Sea View Elephant Camp and Kinnaree Elephant Camp, all in Rawai; an unregistered house on Soi Yodsanae in Chalong (in the hills on the way to the Big Buddha); Kalim Elephant Camp in Patong; JW Marriott Phuket Resort & Spa in Mai Khao; and Eco Elephant Riding in Cherng Talay.

The raids followed reports that many elephants had been smuggled across the Myanmar border to Thailand to work in the elephant trekking tourism industry, said NREC Commander Norrasak Hemnithi.

However, no arrests were made in the raids in Phuket on Wednesday, and officers are still questioning the elephant camp owners, explained Pol Maj Gen Norrasak.

The elephants were technically “seized”, but are still staying in their respective camps while officials continue their investigation, he added.

“We came to Phuket to collect blood samples and DNA swabs, and check the elephants’ microchip implants so we can further our investigation about their origins,” Gen Norrasak said.

The raids were carried out with assistance from Department of National Parks, Wildlife and Plant Conservation (DNP) officers, the Phuket Marine Police, and Phuket Tourist Police.

Gen Norrasak explained that the Phuket raids followed his officers’ discovery several months ago that 69 elephant registration documents issued in Chaiyaphum Province were not issued for particular elephants.

“This meant people could use the documents for any elephants, including those illegally obtained from the wild,” he said.

“The registration documents were issued by a Chaiyaphum Provincial Chief Administrative Officer who has since retired,” Gen Norrasak added.

No arrest warrant has yet been issued for the former high-ranking official, and he has not been charged for forging official documents.

“We still have to collect more evidence,” Gen Norrasak told the Gazette.

Regardless, more evidence was not required to have the Chaiyaphum Provincial Court issue an arrest warrant for Surat Termsak and Prasong Bootchaiyaphum.

“Mr Surat is the chief of an elephant camp association in Chaiyaphum,” said Gen Norrasak.

After being brought in for questioning, Mr Surat and Mr Prasong allegedly confessed to conspiring with the now-retired official by filing phantom elephant registration documents for approval, Gen Norrasak explained.

The seven elephants under investigation in Phuket were sold using the fake registration papers, he said.

Gen Norrasak did not blame the elephant camp owners in Phuket for any wrongdoing.

“This is not the fault of the elephant camp owners. They did not know the registration documents they were given were fake, and the process of how those registration papers were issued was not transparent,” he said.

“The people to blame are Mr Surat, Mr Prasong and the officials involved in issuing those papers,” he said.

“We will investigate further all the officers involved in issuing fake elephant registration documents. We will press serious charges against all involved, no matter who they are,” he promised.

“We hope the raids will help reduce the problem of poaching wild elephants, and stop people from killing mother elephants for their babies,” he said.

Sexagenarian on cycle tour of Thailand stops by Phuket