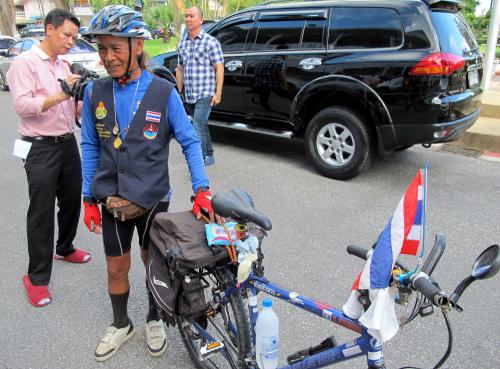 PHUKET: Retired teacher Manit Intarit, 66, stopped by Phuket Provincial Hall on his bicycle on Tuesday to meet Phuket Governor Maitri Inthusut on the ninth day of his cycling trip around Thailand to honor HM The King and Queen.

Pony-tailed Mr Manit, who hails from Pattani, said, “I want HM The King and Queen to know that residents of the Deep South, who live so far from them and currently face so much violence, still want to live in peace and love our King and Queen more than anything.

“That is the inspiration for me to make this trip,” he said.

His 116-day trip will take him through every province in Thailand in a route resembling a backwards question mark.

Mr Manit carries with him a letter of introduction from Pattani Governor Pramook Lamoon, who has alerted the governors of every province to expect Mr Manit and requested they provide him with accommodation.