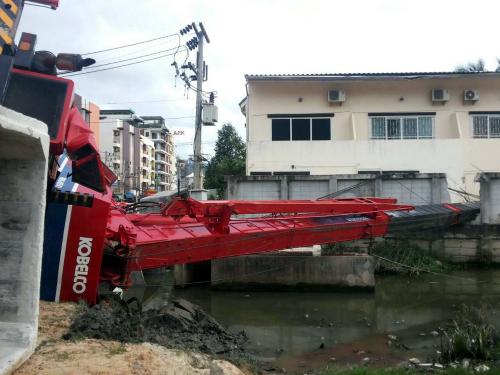 PHUKET: For the second time in just over a month, a crane being used to install water pipes on Phang Muang Sai Kor Road in Patong toppled over yesterday afternoon, landing this time on a garden wall.

The accident occurred at about 4:30pm near Patong Hospital (map here).

The crane operator, Phol Phongsaen, 32, said the crane fell because the soil under the vehicle was too soft.

A similar cause was given for the accident on July 31 (story here).

Mr Phol, who did not flee the scene, told the Phuket Gazette, “I had set two of the support arms for the crane and was about to lift a cement pipe. Then the arms sank into the ground, causing the crane to fall onto the wall.

“The soil was too soft, that’s why the crane lost control,” he said.

The same company owned the crane – a different one – that collapsed on July 31.

The cost of damage from yesterday’s accident has yet to be estimated.