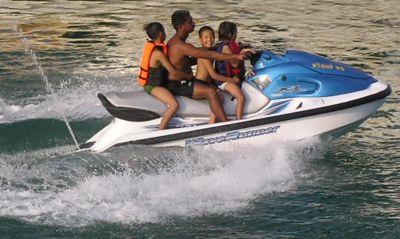 PATONG, PHUKET: Phuket jet-ski operators will have to get accident insurance for their vehicles or cease doing business on Phuket’s beaches, it was agreed at the key ‘jet-ski summit’ in Patong today.

Police chief Maj Gen Pekad said three US Navy representatives had met with him recently in advance of the arrival in Phuket of around 4,000 sailors on three US warships next week.

“They said they have forbidden their men from hiring jet-skis,” he said.

“I told them not to worry because I guarantee from now on there will be no more scams or problems involving jet-skis in Phuket,” he said.

He told the assembled jet-ski operators they had to sign up to the insurance scheme – “without making a fuss”.

President of Phuket Jet-ski Association Anusorn Sahreh agreed insurance for jet-skis would be a good thing “in an ideal world”, but said in the current economic climate, his members just couldn’t afford it.

“We only work six months a year. We’re not all rich,” he said.

Mr Anusorn said his preferred solution to the problem was for every jet-ski outfit in Phuket to agree to use the same rental contract.

While disputes with tourists were common in Patong, they were quite rare in other parts of the island such as Bang Tao, he said.

Nevertheless Vice Gov Smith, who chaired the meeting, said the insurance scheme would have to go ahead.

One insurance company has already said it is willing to insure jet-skis.

Danai Rojjintavej, manager of the Phuket branch of Bangkok Insurance, told the meeting his company would be glad to provide the service, “but we’ll need to see the operators’ rental contracts first.”

A source in the governor’s office told the Gazette that operators would have to insure their jet-skis within one month of that meeting or stop doing business.