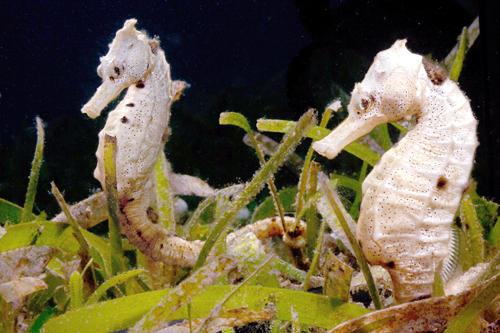 PHUKET: Project Seahorse calls on all divers and marine enthusiasts to help with the recently launched three-year project aimed at studying the seahorses of Thailand.

Seahorses were one of the first fish species to be added, in 2004, to Appendix II of the Convention on International Trade in Endangered Species of Wild Fauna and Flora (CITES), which demands that countries maintain “sustainable trade” and monitor populations. Thailand, the world’s largest exporter of seahorses, has taken pro-active steps to assess the populations of this peculiar sea creature and now needs our help.

“In Thailand we are just starting to evaluate seahorse populations, which is why we are asking people to help us,” explains University of British Columbia doctoral student and seahorse expert Lindsay Aylesworth, who is leading the field research team for Project Seahorse. “We are basically going in with very little information about where seahorses are in Thailand; what environments they inhabit; and what their [population] densities are like.”

Divers in Thailand have been offered a unique opportunity to help save these charismatic, quirky sea creatures and the multitude of marine environments they inhabit. Project Seahorse, a non-government-organization (NGO) based out of the University of British Colombia, Canada, and the Zoological Society of London, has an online ‘citizen science’ database called iSeahorse. This database is designed for divers, scientists and other seahorse enthusiasts to upload their photos and sighting information.

Project Seahorse scientists, collaborating with Thailand’s Department of Fisheries and Kasetsart University in Bangkok, will then use this vital information to map data-deficient seahorse populations, determine their threat levels and develop effective conservation actions.

“We are really trying to reach out to the dive community to see if they are willing to share their seahorse photos and dive spots where they’ve spotted seahorses,” says Lindsay. The sightings will be used to mark future field sites for more in-depth research. Divers first register, either through Facebook, Twitter or online, before submitting their sightings.

“We encourage you to submit your data from any sighting, no matter how old. And even very minimal amounts of information are incredibly valuable. You do not need to know the species’ name or even the exact location of your observation – if you have seen seahorses in the wild, then we want to hear from you!”

Although seahorses are targeted by some country’s fishing industries for the aquarium trade, seahorses in Thailand are usually ‘by-catch’ – accidentally captured in fishing gear targeting other animals, explains Lindsay.

There are many characteristics used to identify seahorses, most notably their distinctive spines along the body.

“Fishers sell them to local buyers as dry individuals. Mostly they are used for traditional medicines. There is a history of seahorses being used for their curative powers – anything from swollen lymph nodes to arthritis or male fertility problems, because it’s the male seahorse that carries the babies [male seahorses are the only male in the animal kingdom known to give live birth].

“Usually what happens is you take the dried seahorse, grind it up into a powder and mix it with honey or some other herbs, and drink it as a tea,” says Lindsay.

“Seahorses are a great tool for raising awareness of general ocean conservation issues, from habitat-health to making sure we have sustainable fisheries.

“They also have an ecological importance; Seahorses don’t really have stomachs so they are voracious predators. They live in an environments where they basically feed on small crustaceans and baby fish larvae. There is some research that suggests they are important to structuring the fish community and the areas where they are found,” she adds.

Now, with the tools to actively contribute to the conservation effort of these shy, but vital creatures, it is up to the divers of Thailand to make a difference.

Keep checking our Phuket Lifestyle pages for the latest features from across the island. Join our Facebook fan page or follow us at @PhuketGazette.