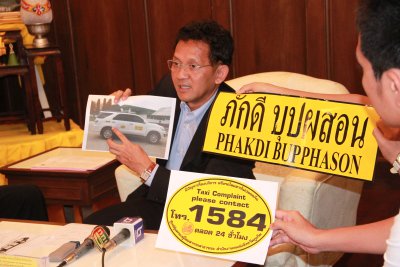 PHUKET: All illegal taxis operating in Phuket must be “stickered” and in the process of becoming legal by November 1, said Phuket Vice Governor Chamroen has announced.

“There are still 2,882 illegal taxi cars in 186 taxi centers in Phuket. Only 150 have completed the [licensing] procedure and have been issued green plates,” V/Gov Chamroen told a meeting of officials at Phuket Provincial Hall yesterday.

There will be a delay of about 180 days before all legal taxis are sporting green license plates, he added.

As the taxis go through the process of becoming legal, they must display stickers on both sides of the car bearing the taxi car number, the name of the owner in both English and Thai and the complaint number (1584), he explained.

“The name of the driver and the taxi fares will be displayed inside the taxi,” he said.

A land transportation committee from Bangkok is expected to arrive on Monday and examine all 186 taxi centers to ensure that the system is in place, said Phuket Land Transportation Office (PLTO) chief Teerayut Prasertpol.

“If they find any of them using illegal taxi cars that are not currently in the process of being converted into legal taxis, they will issue the car owner with a warning. However, after November 1 any illegal taxi car owner and driver operating will face the law,” Mr Teerayut said.