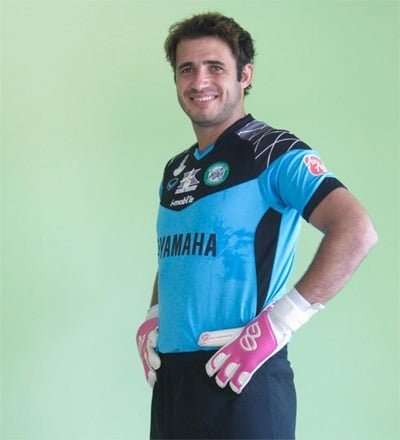 PHUKET: Former Phuket FC keeper Alonso Goleiro has threatened to appeal his recent dismissal from the club to the football’s highest international governing body, FIFA, on the grounds of unfair treatment.

Alonso, a Brazilian national who is registered in the Thai Premier League under the surname of Carvalho, told the Phuket Gazette that he had initially signed a two-year contract with the club back in July worth 2 million baht.

However, he said that the team canceled it with only one day’s notice.

“I don’t even have enough money to pay my rent in Phuket, let alone a plane ticket back to Brazil,” he said.

In an email sent to select members of the media, including the Gazette, Alonso claimed Anurak Srikerd, who was appointed Head Coach at the end of September, had it out for him and other foreign players on the team.

The saga reached boiling point last week when the Brazilian was kicked out of the team’s training camp in Bangkok for allegedly bringing a girl into the player’s accommodation quarters.

“The woman, Jeab, was the girlfriend of Mr Paulo Cesar, who is a goalkeeping coach for the Thailand national team… She was not my girl. Paulo already explained this to the president and the hotel’s cameras can prove this,” Alonso told the Gazette.

In his email, he went on to write, “As for the Orchid resort hotel [incident], most players took [their] wives, girlfriends, and [other] women into the hotel… and it was never a problem.”

Alonso claimed that Anurak singled him out in order to terminate his contract, questioning the coach’s underlying motives.

The Brazilian continued, saying that Anurak had employed double standards, and besides had made a number of tactical errors in Phuket FC’s last three games, fielding players out of their positions against Sri Racha FC and Suphanburi FC, both matches that Phuket FC lost.

He also alleged that the coach forced another injured, foreign player to start in the 2-1 defeat against Bangkok United.

Alonso did make reference to justify his frequent absences over the last few months, saying that he had submitted sufficient medical certificates to the team.

Included in Alonso’s email was the alleged statement issued by Coach Anurak Srikerd after Alonso’s dismissal from training camp:

“…We found that during August [and] September Mr Alonso Carvalho took 12 days of sick leave [including] one day for personal leave and four days for pain… 17 days in total… we found that at the end of the second half [of the season], he failed to give collaboration in training, was unpunctual and failed to comply with instructions from the coach…”

Alonso, however, included in his email details to justify such absences, saying that he had submitted sufficient medical certificates to the team.

Coach Srikerd in the alledged statement continued, “Since I was appointed as the head coach [at the end of September], I realized that he [Alonso] is still having the said behavior… Therefore, Mr Alonso will be excluded from our team-making program.”

Unable to contact Coach Anurak for comment, the Gazette did speak with Paitoon Silapawisut, the personal secretary of Phuket FC president Pamuk Achiriyachai, who confirmed that Alonso’s contract was terminated as of October 12.

“His last official day on the team was on October 11… Regarding allegations that his and other players’ salaries were withheld, we have all the evidence to prove otherwise,” Paitoon said.

He added that Alonso Goleiro had demanded a full month’s salary for October and a paid flight back to Brazil, but that the team had yet to agree to any of his demands.

“Right now, we can only confirm that his contract was terminated. Though this issue is between Alonso and the president, I think he [the president] will stand his ground, based on the evidence… it is clear that Alonso did not follow the regulations set by the team.”

Meanwhile, relegation pressure is mounting high for 14th-placed Phuket FC, now training hard in Central Thailand for their final away match of the season, to be played tomorrow in Nakhon Pathom.

Their opponents, Rajpracha FC, second from bottom in the 18-team first division, can no longer escape the five-team relegation pot and thus will be playing only for pride.

Phuket FC, however, still have a mathematical fighting chance to escape relegation if they can prevail tomorrow, and again next Saturday in the season finale at home against 16th-placed JW Rangsit FC.

Both matches will kickoff at 4pm, with tomorrow’s match to be played at Mahidol University’s Salaya campus, an hour’s drive west of the capital, Bangkok.

The Gazette will be joining the Phuket FC fan club bus to cheer on the Islanders in their fight for survival.

Aside from six points, Phuket will also be hoping for other results to go their way and monitoring the results of four other teams – Bangkok FC, Khon Kaen FC, Songkhla FC and Pattalung FC in the final two fixtures.

Following are all the final fixtures of the 2012 season:

Phuket orphanage gets bikes from Quest