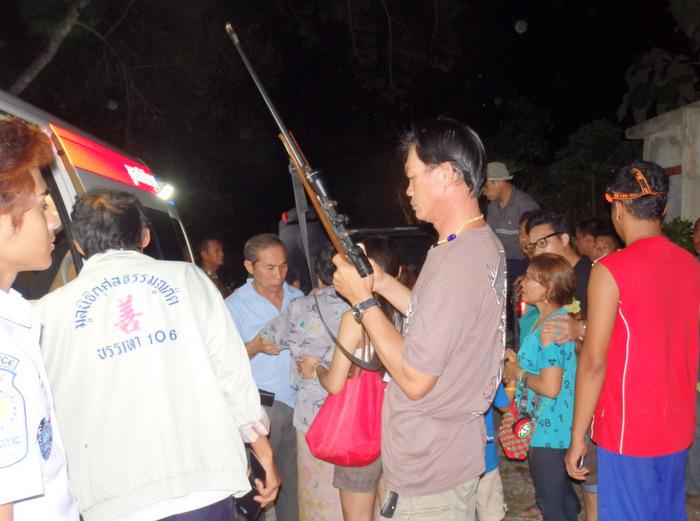 PHUKET: Police are not yet convinced that a man shot dead while hunting with friends in central Phuket last night died from his .22 rifle accidentally discharging while the men were climbing a hill in the dark.

Maj Kittipoom Tinthalang of the Thalang Police was called to a small village in the foothills of the protected forest area near Bang Pae Waterfall at about 8:30pm.

“When we arrived, the body of Wisut Polsanay, 46, was lying in the back of a pickup truck with a single gunshot wound on the side of the head,” said Maj Kittipoom.

“The pickup truck belonged to his relative, and two other men – Naret Klintrai, 32, and Jarus Raksasang, 36 – explained they were hunting with Mr Wisut when he was shot.”

Mr Naret told police that he was walking behind Mr Wisut when he heard a gunshot in the dark.

“We were walking up a hill. I heard a gunshot, then Wisut fell to the ground,” he said.

Mr Naret explained that he and Mr Jarus called relatives for help. “It took almost an hour for them to reach us,” he said.

Among those at the scene was Mr Wisut’s mother.

Maj Kittipoom told the Phuket Gazette that police are treating the incident as a possible murder.

“We are not yet convinced that it was a hunting accident. We will question Mr Naret and Mr Jarus further,” he said.

“The body was taken to Thalang Hospital for examination, and forensic officers have been called in to assist the investigation.”