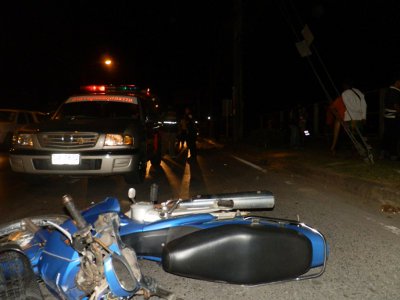 PHUKET: A hotel barman died instantly last night when his motorbike slammed into a utility pole in Koh Kaew, north of Phuket Town.

Phuket City Police were notified of the accident, opposite the Isuzu showroom on Thepkrasattri Road, at about 11:45pm.

Phuket Kusoldharm Foundation rescue workers rushed to the scene to find 40-year-old Phichit Masmalai lying face down on the road in a pool of blood.

The rescue workers administered emergency first aid to try to revive him, but the resident of Cherng Talay was declared dead at the scene.

A search of his body recovered an employee card identifying him as a worker at the Sunwing Resort Kamala Beach, where he was a barman.

Rescue workers said Mr Pichit appeared to have died of massive head trauma after losing control of the motorbike he was riding and hitting a roadside utility pole face-first at high speed.

He was wearing a low-cost safety helmet that cracked during the crash, workers said.

A heavy-duty, full-face helmet might have saved his life, they said.

Witnesses at the scene told police no other vehicles appeared to be involved in the accident.

Phuket Police round up Rohingya refugees in Nai Harn