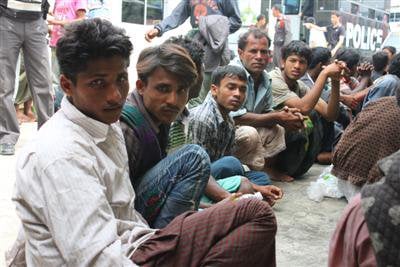 PHUKET: Chalong Police have rounded up 90 starving Rohingya boat people who came ashore in the south of Phuket this morning, but 12 more remain unaccounted for.

The Rohingya, all males, were on their way to Malaysia when they ran out of food and their wooden boat began to fall apart at sea, forcing them to come ashore at Nai Harn Beach at about 5am.

Their arrival was quickly reported to patrol police, who rounded up the men in separate groups of about 30 each in different parts of Nai Harn in Rawai this morning.

Penniless, disoriented and unable to speak Thai, most of the men could do little but wait for their inevitable capture by police.

However, 12 Rohingya remain unaccounted for.

Those captured were sent to Chalong Police Station, where they gulped down drinking water and devoured fried chicken, bananas and sticky rice provided by officers there.

Communication with the men was a problem. One of their number, the only one who could speak Burmese, told police through an interpreter that they set off 12 days ago in hope of reaching Malaysia.

They set out from their homeland “between Burma and Bangladesh,” the man said.

The man said there were 102 people in the open boat, meaning that 12 remain unaccounted for.

The group ran out of food and water three days ago, the man said. Thirst, hunger and the problems with the wooden vessel forced them ashore short of their goal. The landing was sadly reminiscent of a similar beaching a year ago, when 70 Rohingya were rounded up and eventually deported.

Their boat, about fifteen meters long and five meters across, appeared to have broken in half as it hit the beach sand.

The youngest members of the group today were four boys just 13 years of age.

The next stop for the group will be the detention center at the Phuket Immigration Office, police said.

The Rohingya are a predominantly Muslim ethnic group originally from the Rakhine State of Burma.

Persecution by the Burmese junta beginning in 1978 led to their mass migration, with hundreds of thousands fleeing to neighboring Bangladesh and others taking to the sea in hopes of reaching Muslim countries like Malaysia in search of a better life.

Chalong Police continue to search for the 12 remaining members of the group this afternoon.