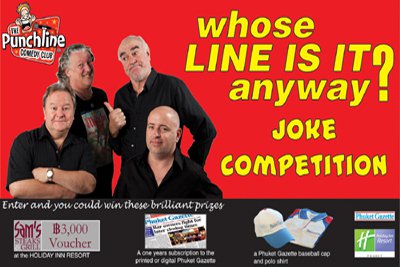 PHUKET: In the run up to The Phuket Punchline Comedy Club’s February 29 ‘Whose Line is it Anyway?’ show, the Gazette asks each of the comedians about themselves.

Phuket Gazette: Where and when were you born?

Steve Steen: I was born at home, but I don’t remember too much about it, I was pretty young. Born in the fifties or in a crossfire hurricane.

PG: Any amusing tales from your childhood and/or school days?

SF: In my school nativity play when I was five years old, I was offered the part of Joseph, but I turned it down because I wanted to be one of the inn-keepers because they shout, “no room at the inn”. So I got the part of inn-keeper number two. When Joseph asked “can we stay the night?”, I said “yes come in, how many nights are you staying for?” Big laughs all round.

PG: Did you attend University or some other higher education establishment?

SF: No university for me. Straight from school to drama school in London for three years. Shakespeare, Chekov and drinking.

SS: I went to Oxford, but it rained a lot that day, so I went to Cambridge. People asked me what I read there? I tell them beer pump labels. But it’s not what qualifications you have that open doors in life , but how you turn the knob.

PG: How, when, where, why did you become a comedian/comedy performer?

SF: When I was born, my mother looked at the doctor, who was holding me and said, “stop joking where’s the baby?”

SS: I went to a school that was so cruel that the only way to survive was to laugh.In 1970 I went to the Jimi Hendrix Isle of Wight festival and I was selling bottles of his sweat with a street value of 60 quid. At the police interview, the police asked if I was having a laugh and I thought, “Now there’s an idea.”

PG: Did you/do you have any comedy heroes? If so, what do you like about them?

SF: Tommy Cooper. He would get laughs as soon as he came on before he said anything. Also Steve Steen, Andy Smart and Ian Coppinger, who are in the show with me.

SS: Galton and Simpson, Dick Clement and Ian la Frenais, Neil Simon, Trey Parker, Matt Stone, Jim Sweeney, and many others too. They are the people who write the scripts for comedians, comedy performers and actors to screw up or get right.

PG: Which current comedian makes you laugh and why?

SS: Greg Proops. He’s funny, intelligent, fast as lightning, funny, has a big heart, scathing, funny, educational and ..oh yeah, he makes me laugh my ass off too!

PG: Have you been to Thailand before? If so, when, where and what did you like and dislike about it?

SF: Yes, we have been to Thailand many times over the years doing the show in Bangkok, but I have never been to Phuket. I love coming to Thailand. The variety of food is incredible, the atmosphere and of course the people. I am two-meters-tall so they make me look even taller. Dislikes?

SS: Yes I have, we have been to Bangkok many times, love the people, love the temples, love the food of course, love the massages, but still waiting for a happy ending – to this anecdote, I mean.

PG: Have you performed in Thailand before? What was it like?

SF: The gigs were great and very enthusiastically received.

SS: In Bangkok and it was great.

PG: Is there a difference between performing to an audience of expats and an audience from your home country?

SF: Yes, the expats tend to be more excited and easy going, which we like.

SS: Yes, the main difference is the return fare. A lot cheaper in my home country

PG: Outside of your homeland, where is the best place you have performed?

SF: Galway in Ireland. They have a great sense of humor and if they like you, they’ll buy you lots of beer after the gig and sometimes follow you all the way home singing your praises. Mad, but fun.

SS: The best place outside of my homeland to perform is Ireland. Lovely people, sharp as a knife, funny and the Guinness is great. New York is another brilliant place to perform, everyone is a comedian over there and the libraries and museums are peachy too.

SF: In one part of the show I leave the venue and have to come back in later and guess the unusual job that the audience have just made up for me. I take an audience member out with me to prove I can’t hear the job suggestion. At that point, I usually get a beer and chat to them. Once, we got on so well I forgot to go back in and finish the show, the other guys had to come out and find me and drag me back in.

SS: Yes, I’m sure there are, but I drink so much after the shows I can’t remember any of them.

There you have it. All four acts have given us a brief window into their comedic souls. The next stage is that of the Holiday Inn in Patong on Wednesday night, so get your tickets now for a night of guaranteed fun and frolics.

Tickets can be purchased at PhuketGazette.net/tickets.

The Phuket Gazette is a sponsor of the Punchline Comedy Club events.

Phuket Lifestyle: Go with the flow