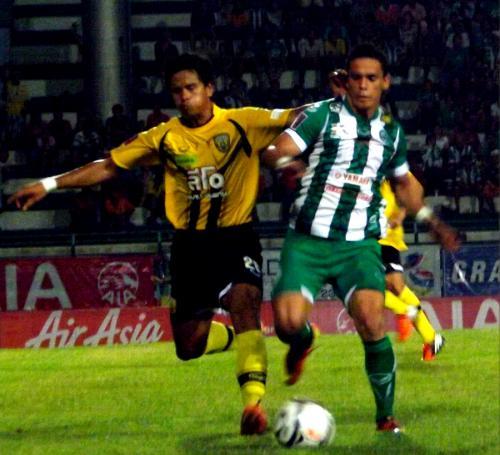 PHUKET: Recovering from their Wednesday night draw with Royal Navy FC, 6th-placed Phuket FC will be looking to bag all three points in their away fixture tonight against the 14th-placed Khon Kaen FC T-Rex.

To kickoff at Khon Kaen OrBorJor Stadium at 6pm, the match is both side’s 23rd of 34 scheduled matches in the Yamaha League One 2013 season.

Speaking to the Gazette on the phone from Khon Kaen, Phuket FC Coach Teco said: “We do have some key players who cannot play in this match, namely defender Yusuke Sato and midfielder Geoffrey Doumeng, who are still injured and recovering in Phuket.”

Nonetheless, the Brazilian boss said that the team is still in decent form and will work hard for the winning result. “Good news is we got Dudu [Luiz Purcino] back and he is ready to play.

“Dudu had to sit out the match with Navy due to an accumulation of yellow cards, Coach Teco explained.

Dudu scored the winner in Phuket FC’s first match with Khon Kaen back in April. Click here for story.

Win, lose or draw, Phuket will stay in Khon Kaen tonight, boarding a bus to Bangkok tomorrow morning at 6am, as to catch their flight from the capital to Phuket at 1pm.

Training will commence on Monday, as to prepare for their next match, at home against Airforce United on Wednesday. Kickoff will be 6:30pm.