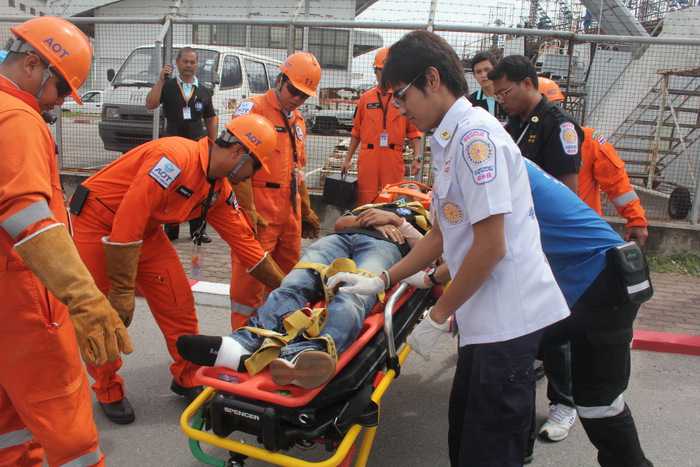 PHUKET: A full-scale tsunami emergency-response drill will be held in Phuket on Christmas Day, ahead of three days of official events to remember those who perished in the disaster 10 years ago.

The decision to stage the drill on December 25 was announced at a Provincial Hall meeting on Wednesday, attended by Russ Jalichandra, deputy director-general of the Department of Information.

“We are fully aware that the drill may affect some people who lost their friends and family 10 years ago,” Trakul Thotham, director of the regional Department of Disaster Prevention and Mitigation (DDPM) office in Phuket, told the Phuket Gazette.

“Our intention is not to remind people of their great loss. However, we will use this opportunity to remind them about being alert and prepared for natural disasters, so they know what to do when it occurs.”

A public announcement campaign will begin about two weeks before the drill to prevent confusion, Mr Trakul said.

“We will conduct the drill in Patong, Karon and Rawai in the morning. Local government officials will carry out campaigns to let residents and tourists know about the drill and they will ask hotels to inform their guests,” he said.

“This is such a sensitive time. A lot of people come back to Phuket to remember their loved ones. However, nobody knows when such a disaster is going to happen. We hold these drills so people know what to do.”

At the meeting on Wednesday, Mr Russ noted, “The ministry will hold ceremonies in memory of the victims of the Indian Ocean Tsunami, which inflicted great loss on Thailand.”

Although 5,395 confirmed deaths stands as the recognized death toll for Thailand, an estimated 8,212 people along the Andaman coast died in the disaster.

On December 26, 10 years to the day that the devastating waves struck, a ceremony will be held at the Tor 813 Tsunami Memorial Park at Khao Lak, north of Phuket.

The ceremony will be held at the site of patrol boat Tor 813, which remains one kilometer inland, where it was stranded by the tsunami.

A confirmed 3,950 people died in Khao Lak, though estimates including the number of people missing in the area after the waves exceeded 4,500.

Among those in Khao Lak who died was Bhumi Jensen, grandson of HM The King Bhumibol Adulyadej.

“The ceremony will be marked in memory of the victims who lost their lives in the waves. The Thai government has invited VIPs from other countries to attend the ceremony,” Mr Russ said.

In Phang Nga, events commemorating the 10th anniversary will be held over two days.

“On December 26, multi-faith ceremonies will be held at the patrol boat memorial site, and there will be a ‘Light Up’ ceremony that night and musical performances on stage,” Mr Russ explained.

“December 27, activities as part of the event include a visit by officials to Baan Nam Khem, which serves as a model village for tsunami preparedness. This will show that Thailand is well-prepared for [another] tsunami.”

In Phuket, there will be the traditional multi-faith services at the Tsunami Memorial Wall at Mai Khao in the morning, as well as the annual Light Up Phuket candlelight vigil on Patong Beach that night, Phuket Governor Nisit Jansomwong explained.

There will also be three days of events held on Patong Beach to commemorate the occasion, Mr Russ added.

“During the three days, we will have experts on stage [at Patong Beach] explaining how to be prepared for a tsunami and many of the events will be broadcast live on the National Broadcasting Services of Thailand [NBT, Thai TV Channel 11],” he explained.

“This will include a special documentary showing our recovery efforts in affected areas over the past 10 years, which will be screened at Patong while it is broadcast nationwide on NBT.”