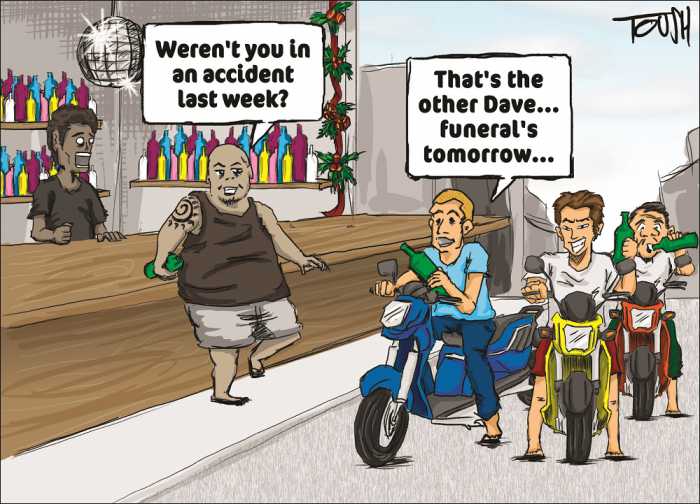 PHUKET: Phuket’s yet-to-be-observed first marking of the annual World Day of Remembrance for Road Traffic Victims (story here) needs to serve not only as a memorial to those who have perished on our roads, but also as a reminder that we have a long way to go in raising road safety to something resembling acceptable international standards.

Statistics indicating a fall in the number of road-accident fatalities on the island over the past several years are encouraging. Although the trend is too short to be statistically significant, it is certainly better than a rise in road fatalities.

Equally encouraging is the fact that the annual number of road deaths has fallen despite large year-on-year increases in the number of vehicles on our roads over the same period.

Unfortunately, this is where the good news ends and grim reality rears its ugly head. As the pleas for improved road safety continue, Phuket’s streets remain among the most dangerous not only in Thailand, but in the world.

The Phuket office of the Department of Disaster Prevention and Mitigation (DDPM) has hit the nail on the head by making local youths the target of their safety-awareness campaign to mark the day. After all, young males on motorbikes – often drunk or otherwise under the influence – make up the single largest demographic of road accident fatalities year in, year out.

However, efforts to raise awareness of the importance of traffic-safety issues across such a thin slice of a society are unlikely to have much effect, especially in a place where reckless behavior among adults is so common.

The list of dangerous driving behaviors that pass as “standard operating procedure” here, but which would be unthinkable in most developed countries, is far too long to list.

Despite so much talk about road safety, the concept of issuing tickets or making arrests for “moving violations” remains a foreign concept. Virtually all fines are issued at fixed “traffic checkpoints”, the location and times of which are easy enough to predict even when not announced in advance, such as during the “Seven Days of Danger” campaigns deployed during holidays.

A good indication of just how bad local driving skills are is the fact that hardly anyone ever uses their horn to shame fellow road users for transgressions of driving etiquette; it is as if it were a lost cause – or they don’t want to be shot.

In many ways, it strikes the Gazette as almost miraculous that the road-fatality rate is as low as it is considering all the mindless mayhem that takes place on our streets. Perhaps this is the silver lining of the ever-increasing traffic on the island.

The Gazette would like to appeal to all Phuket expats to help the cause by setting a good example when driving, rather than adopting the “when in Rome” mentality that has seen so many foreigners returned home in body bags: You have been warned.

Waves of kindness in Phuket