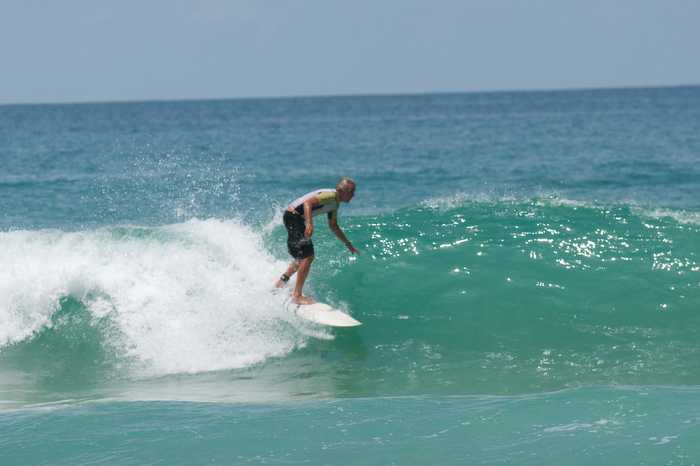 PHUKET: Phuket is famous and infamous for a list of commendable and questionable attributes. One thing that seems to have made it onto the list in certain circles is surfing.

Because of the teasingly short surfing season and fickle beach breaks, Thailand will never qualify as a dedicated surfing destination. However, for beginners or less-seasoned surfers whose standards for waves have yet to jade them, the Andaman’s warm waters can be mighty tempting compared with, say, Japan in the middle of winter.

As the end of this year’s surfing season comes into sight, conversation out on the water has ebbed toward comparing the past few seasons. One thing that everyone seems to collectively agree on with a tinge of disdain is that last year’s waves were better than this year’s.

The other change that has been noticed, with slightly less chagrin, is the increase in the number of surfers in the water. Phuket’s breaks are pretty uncrowded compared with big-name destinations in Indonesia or Australia, but when there are only 10 people in the water, another five seem like a crowd.

The thing is – and I’d expect older surfers to vehemently disagree with me on this – everyone has an equal right to be playing on the waves. And, yes, it is playing – don’t take yourself too seriously.

What some people don’t realize though, is what gets surfers steaming is the ignorance of, or complete lack of deference to, etiquette. That’s right, this isn’t ‘Nam, there are rules.

Beginners seem to always have a herd mentality and want to be with the group out where the action is when, in fact, they should be keeping closer to shore. Surfing has a notoriously steep learning curve and it typically takes a huge investment in time just to figure out the basics.

But while they are learning, beginners are out in the water with other surfers and swimmers with a nine-foot monstrosity of a board that they have little to no control over.

If they are really getting in the way, someone will certainly inform them of their transgression, and most likely, not so politely.

It’s not just beginners who get a bristly response though. Even here in Phuket, surfers will find some local attitude. The surfing scene is a bit of a contrast to other sports. Camaraderie doesn’t always come easily and it takes time to establish yourself in the pecking order which usually entails a little bit of proving yourself and a bit more respect for etiquette.

It’s important for the seasoned surfers to see through the cloud of frustration from dealing with beginners, and be receptive to outsiders joining the lineup at your spot. Surfing is getting more popular, resulting in more people on the water, so it’s becoming increasingly important keep it light-hearted.

Opinion: Saying it with puppets in Phuket [video]