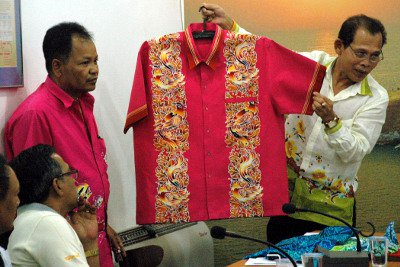 PHUKET: The Phuket Provincial Office will provide special “souvenir” shirts for Cabinet ministers and VIPs attending the Cabinet meeting in Phuket on March 19-20.

Vice Governor Somkiat Sangkaosuttirak announced the decision to have souvenir shirts handed out at a meeting at Phuket City Hall last Thursday.

The main points were the shirt style, color, pattern and the number of shirts to be given to the Cabinet and Prime Minister Yingluck Shinawatra to wear during the Cabinet meeting, V/Gov Somkiat said.

The shirts will quickly become collector’s items, as only 150 to 200 will be made.

Previously, the number of shirts decided on was 400, then the organizers were to order another 300.

However, due to budget constraints the number will now be only 150 to 200 shirts, V/Gov Somkiat told the Gazette today.

The shirts will be short sleeved with a Sino-Portuguese pattern.

The shirts have to be ready by this Sunday, the day before the Cabinet meeting is due to start, V/Gov Somkiat said.

Phuket lifeguards vow to “not let tourists down’