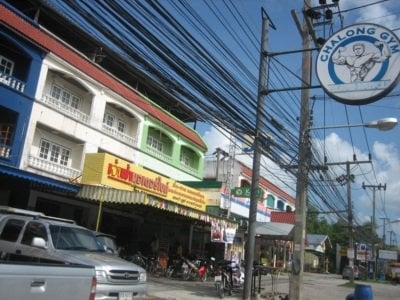 CHALONG, PHUKET: Members of the Chalong Gym on Chao Fa East Road in Phuket will be pleased to hear that the popular fitness center’s recent closure is only a temporary measure.

When morning fitness enthusiasts arrived at the gym on June 27, they found the doors locked and saw that exercise equipment had been removed.

Some members had recently paid their 1,000-baht monthly membership fee, with one member saying he had payed 9,000 baht in personal training fees shortly before the gym closed.

The gym was closed by the former American owner, three days prior to the lease on the premises expiring at the end of June.

The gym remains closed for the time being.

Some gym members have filed charges against the former owner and police are inviting other members who have lost fees to file reports in person at Chalong Police Station.

Police Major Jarun Bangprasert told the Gazette that the former owner told his customers he was going to extend his rental contract. “He did not do this, but he still took money from his customers for new memberships,” he said.

“The former owner then moved all the exercise machines out of the gym without notifying his customers,” Major Jarun added.

The gym now has a new owner and management. Its new General Manager said that she hopes the gym will be open again by July 7.

She added that members who have lost out on fees already paid to the former owner would be able to discuss a two-week waiver on any new charges when the gym re-opens.

New fitness equipment is being installed at the gym as the new owners hurry to get he place ready in time for the July 7 re-opening.

This is the second Phuket gym to close its doors within the past two months. The Easy Fitness Center on Chao Fa West Road near Central Festival Phuket closed suddenly in late April, leaving many members out-of-pocket,