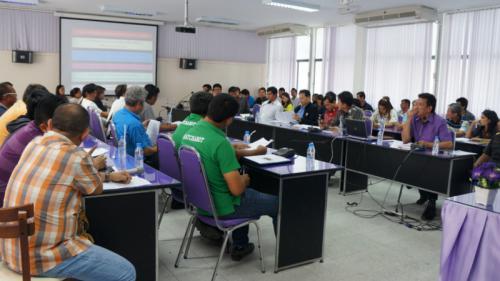 PHUKET: Within two weeks, buses and trucks headed to Patong will be barred from using the Patong Hill road, government officials and bus operators agreed at a meeting yesterday.

The one-month trial ban will force most heavy vehicles to choose alternate roads into Patong, but will permit them to use the hill road when they exit the resort town.

Not all buses will be banned – the airport express bus and local buses may continue to enter Patong via the hill road.

“All the Patong Hill accidents happened when vehicles were going toward Patong,” he said.

“Bus drivers should use the Kamala Hill road instead, it’s much easier to navigate than the Patong Hill road,” he added.

During the three-hour meeting, officials and bus operators considered the safety proposals presented to Governor Maitri Inthusut following the deadly bus crash on the hill on December 29 (story here).

Of the nine recommendations from the PLTO, the group chose the one-way option, said Vice Governor Chamroen.

“We will prepare everything necessary before introducing the ban,” he said. “We’ll make sure signs are posted so buses from other provinces know that they are not allowed to enter Patong via the hill road,” he explained.

Phuket bus operators who attended the meeting agreed to the decision, but thought it should not apply to them.

The accidents, said Nopparut Pittayanitchakun, General Manager of JE Siam Holiday Phuket, are “all about drivers who do not have experience driving over the hills to Patong”.

“The PLTO is very strict on the annual bus checks. We operate more than 20 buses, and some of them have to be checked five times before they pass PLTO standards,” Mr Nopparut said.

“So you can see Phuket buses are in good condition, and drivers who regularly drive over the hills to Patong never have a problem,” he asserted.

The bus operators also noted that the re-routing would cause traffic problems on the alternate routes through Kamala and Karon.

“Traffic at Chalong Circle is already bad, and this will make it a lot worse,” said Mr Nopparut.

Those traffic delays could cause their own safety problems, he added.

“When the buses get stuck in the traffic, the drivers may rush when they get to the hills and cause accidents,” Mr Nopparut warned.

“However, we will co-operate with the Phuket authorities on this,” he concluded.

Officials are aware that the one-way solution may create new problems.

“People complained about the dangers of buses being driven over the Patong hills. They asked us to do something to prevent accidents, and this is what we are starting with,” said V/Gov Chamroen.

“We will try it for one month, then we will see what the next step will be,” he added.

The proposal is not the only one on the table for improving safety on the dangerous hills. The Phuket Highways Office has also secured 10 million baht to widen the road at the bottom of the hill on the Patong side (story here).