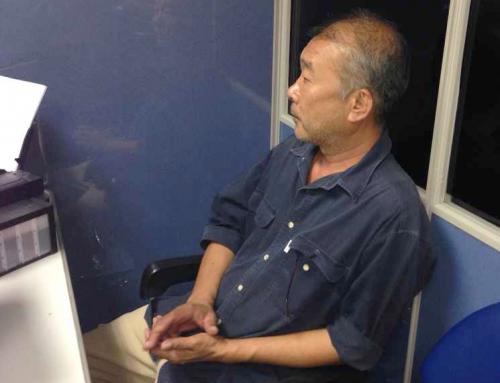 PHUKET: The man wanted for shooting dead a rival in a land dispute yesterday surrendered to Phuket police last night.

Supongdeth Vetchatam, 53, presented himself at the Phuket City Police Station at about 7:30pm. He brought with him his lawyer and the murder weapon – a Smith & Wesson .357 revolver.

“I have owned the land for nine years. I grow coconut trees on it,” Mr Supongdeth told police. “I even fenced it off so people would know that it’s private property.”

After inspecting the land on Tuesday, he found parts of the fence had been removed.

“I heard Mr Echa was the one who removed the fence and I filed a complaint with police that same day,” Mr Supongdeth explained.

The fatal confrontation occurred after Mr Supongdeth brought workers to rebuild the fence.

“I caught Mr Echa clearing the land. We started arguing, and he threatened me with his scythe,” he said.

Lt Col Anek Mongkol of the Phuket City Police confirmed that police had found a hand scythe at the scene yesterday afternoon.

“We also found a gun holster,” he said.

Col Anek also confirmed that Mr Supongdeth did not present any documents to prove he legally owned the land.

Mr Supongdeth was charged with murder and released on bail for an undisclosed amount.