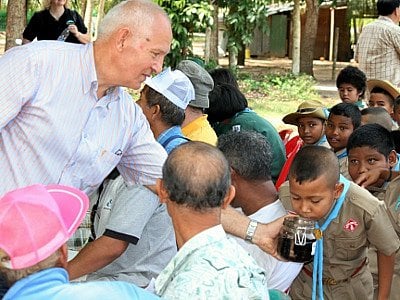 PHUKET: The “Coalition of Global Citizens” known as SEEK Phuket (Society, Environment, Economy, Knowledge) is currently compiling its application to become a fully-fledged non-governmental organization (NGO) in Thailand, one of their founders has told the Phuket Gazette.

“We started informally about four months ago and our lawyers are currently in the process of attaining formal Thai NGO status,” said Nick Anthony, one of the founders of SEEK and the Gazette‘s ‘Person of the Year 2009’ for his environmental campaign work.

He explained that NGO status will help in attracting financial support for the group.

“It will also help in proving the transparency of our organization,” he added.

The move comes as the group steps up its environmental campaign by moving the focus of its projects to a “more specific” level.

“Most [members] have been involved now for the past two or three months. We’ve gone big picture at the high level and now we are getting down to micro level, getting support along the way,” Mr Anthony said.

At a meeting last week, the group began working on the details of its mission by assigning its members to specific projects, Mr Anthony said.

SEEK’s stated concept is to “work as a platform/service to create links between the government, private sector and NGOs to develop [a] sharing and collaboration environment, enhance communication, developing relationships and offering support to projects enabling the community to flourish.”

“We are involved in about a dozen pilot projects around Phuket, everything from water testing through to waste management, sustainability, organic farming and so on,” Mr Anthony said.

He explained that the coalition was lending support to a project by Sustainable Smiles, a global non-profit organization promoting sustainability, at Nai Yang Beach.

The project fits nicely with SEEK’s larger goal of tying together work done by local authorities and hotels in the Nai Yang area to create a model for the rest of Phuket, said Mr Anthony.

SEEK Phuket is also about to launch an awareness campaign for a plastic bag ban that will be launched on HM King Bhumibol Adulyadej’s birthday on December 5 with the aim of gaining support from the island’s retail sector.