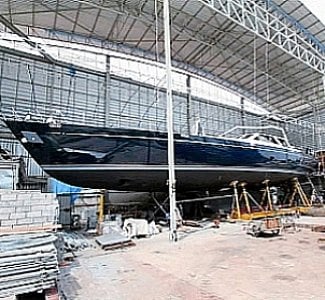 PHUKET: A superyacht made in Thailand has left Phuket’s shores on a circumnavigation of the World.

It has taken more than three years and 375 workers to build, but at last the superyacht Silver Lining has begun its round-the-world voyage.

Formerly one of Hong Kong’s most successful food and beverage entrepreneurs – with 37 restaurants, clubs and factories when he sold his company in 2006 – Chris knows what it takes to build something from nothing.

But his most ambitious venture has been his 31.5-meter yacht, built in the small village of Chebilang, Satun, on Thailand’s southwest coast.

“Many in the yachting community said this standard of yacht could not be made in Satun… I take a lot of pride in proving those people wrong,” Chris said.

Silver Lining is not just a triumph for the Lenz family – and their home for the next two years on the world’s seas – but also a shining example of southern Thailand’s yacht building capabilities.

“This is the first-ever yacht built in Thailand to achieve the American Bureau of Shipping Maltese Cross, the highest standard they have,” Chris said.

If Silver Lining were to be built in Europe, Chris said the cost would have been more than US$20 million (600 million baht), but building in Satun saved him millions of US$ in production costs.

Building Silver Lining has been a monolithic challenge and a logistical minefield in bringing all the parts of the building process together.

After scrapping plans to build a 30 meter catamaran, Chris found the unfinished hull of Silver Lining sitting in a shipyard in northern China, while searching an Israeli website.

Shipping it out of China, and trying to find a place to build his new boat, took time.

“I went to Taiwan and a few shipyards in southern China; either they couldn’t handle a hull this big or they wouldn’t do it.

“Finally I went to Satun, because there was a similar size boat being restored there, so I knew they could handle the size.”

But when Chris visited the shipyard, he found there was a canvas roof being used to shelter the boat building projects. This wouldn’t do.

So he constructed his own building for the Silver Lining project and put his team to work.

No money changed hands with the owner of the shipyard; instead, a simple deal: When Silver Lining was finished, the building would transfer to the shipyard’s ownership. Simple.

But the next chapter in the story of Silver Lining was anything but simple.

After transporting the hull from China on a Russian cargo ship, and then towing it with a 14-meter sailboat from Malaysia to Thailand, Chris was vexed to find the hull was leaking.

Some seven months later, with the hull fixed and a new roof over the project, a team of 110 full-time employees were working around the clock on Silver Lining. Most of the team were Phuket locals and expats.

Chris said they even had local egg and roti naan bread vendors who turned up each day to sell their goods.

Silver Lining launched from Satun on January 20 this year and arrived at Yacht Haven Marina in Phuket in March.

At the time of writing, the crew of nine was making final preparations to leave Phuket.

Silver Lining will first head to Langkawi and then on to Singapore and Bali before setting sail to Christmas Island and Mauritius.

The crew will anchor off the coast of South Africa from late November to March. Then it’s off to the world’s second oldest British colony and the death place of Napolean Bonaparte, Saint Helena Island in the south Atlantic.

After island hopping in the Mediterranean and then navigating across the Atlantic from the Canary Islands to Venezuela, the crew will set a course for the Caribbean, Miami and then Canada.

Chris said that sailing down the Saint Lawrence Seaway and returning to his hometown of Thunder Bay, Canada, will be the highlight of the trip for him.

He has even reduced the mast height of Silver Lining so it can get under bridges on this leg of the voyage.

“This will be the biggest ever single-mast sailboat to go down the Saint Lawrence,” he said.

When they arrive back in Phuket in 2013, the Lenz family plans to move into one of their new homes being built on the fringe of Loch Palm golf course.

And for Chris, there is no intention of rushing back to work.

“We will come back to Phuket to live, but what will I do when I get here? I love having no idea,” he said.

If you would like to find out more about the adventures of Silver Lining, visit yachtsilverlining.com.